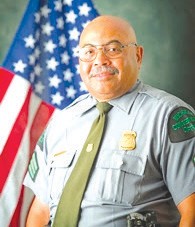 “F/LT. Green’s death is a profound loss for the DNR and for the citizens of the state,” said DNR Law Enforcement Division Chief Gary Hagler. “He was a dedicated professional who was deeply committed to protecting our nation, its citizens and Michigan’s natural resources. Most recently, F/LT. Green was instrumental in the smooth transition of Belle Isle Park in Detroit to DNR management. He will be greatly missed.”

F/LT. Green served as a member of the United States Air Force and the Michigan Air National Guard before retiring in 2004. In addition, he previously served as a police officer with the Detroit Police Department. In 1996, F/LT. Green joined the Michigan DNR as a conservation officer, assigned initially to Oakland County.

F/LT. Green was en route to a meeting of the DNR Law Enforcement Division when the private plane he was piloting, a Piper Cherokee, crashed during its approach to the Harbor Springs Airport. The accident occurred sometime after 11 p.m. F/LT. Green was the only person on the plane. The accident remains under investigation. – G.G.