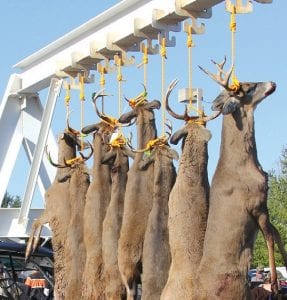 Fog and temperatures that ranged near 50 by mid-day showed a slow opening-day harvest across the state.

LAPEER COUNTY — The 2011 firearm deer season opened November 15, and impressions regarding deer observations, hunting activity, and check station operations from the first few days of the season have been compiled by the Dept. of Natural Resources.

Overall, hunting activity started slow, but appeared to increase later in the week and over the weekend. Deer conditions throughout the state has been reported as good to excellent. The following are the early impressions summarized on a regional basis:

Southern Michigan: Hunting conditions were fair in southern Michigan. Dense fog throughout much of the region on opening morning affected hunters’ abilities to see deer. With temperatures climbing into the upper 50s by late morning to early afternoon, both deer and hunter activity was slowed. Cooler temperatures prevailed the next few days accompanied by wind and scattered snow flurries. About 71 percent of corn was picked by opening day, which matches the five-year average, but was less than last year, when 97 percent was picked. Hunting activity varied somewhat around the region, but appeared the same or lower than last year; shots heard were consistently lower than last year throughout the region over the first few days of the season. Fewer deer have been checked compared to last year, but deer are in good condition. Some check stations noted an increase in 3-and even 4-year-old bucks compared to recent years.

Northern Lower Peninsula: Opening morning was cool, but temperatures warmed by late morning with a mix of clouds and sun. Nov. 16 saw a mix of flurries and accumulating snow in locations with high and gusty winds moving into some areas. Hunting activity last week was reported as fairly light compared to previous years. The northeast portion of the region noted an increase in number of deer checked, but the western and southern portions have noted similar to fewer deer brought in compared to last year. Early reports on weekend check station activity suggest check station and harvest numbers may now have caught up to or exceeded numbers from last year. Deer condition has been described as very good with several exceptional bucks observed at a number of check stations around the region.

Upper Peninsula: Conditions have been fair for hunting, though opening day temperatures were above freezing, moderate to strong winds and winter storm conditions moved through portions of the region on Nov. 16. Hunter numbers across the region appear the same or lower than during the early days of the 2010 firearm season. Most hunters are reporting seeing more deer than last year, and that deer are in good condition. The excellent condition of deer at check stations supports hunter observations. Initially slow activity at check stations picked up near the end of last week to now include similar or increased numbers of deer checked compared to last year.

Each year, DNR Wildlife Division staff working at check stations around the state submit their impressions and a summary of comments provided by hunters from the first few days of the firearm season. These impressions provide an early view of how the firearm season is faring. Deer populations in both northern regions have come through two relatively mild winters in a row, on the heels of two relatively severe winters of 2007 and 2008. Deer numbers appear to be recovering, but more notable is the good to excellent condition being observed by hunters and confirmed by data collected at check stations. License sales through opening day were about 2.5 percent lower than in 2010, which supports the observations of generally lighter hunting pressure in most areas of the state.