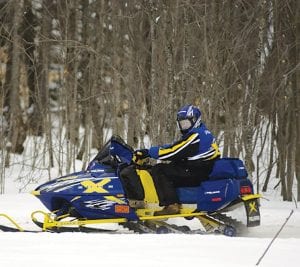 Conservation officers with the Michigan Department of Natural Resources remind snowmobilers that state law does have decibel limits for snowmobiles. Officers in the western Upper Peninsula have been working patrols targeting sound violations in response to numerous complaints from landowners and others who live near snowmobile trails.

Under Michigan law, the muffler on a snowmobile must be in good working order and when in constant operation noise emission cannot exceed the following levels:

For snowmobiles manufactured after July 1, 1977 and sold or offered for sale in Michigan, 78 decibels at 50 feet, as measured using the 2003 Society of Automotive Engineers standard J192.

For a stationary snowmobile manufactured after July 1, 1980 and sold or offered for sale in Michigan, 88 decibels at 13.1 feet, as measured using the 2004 Society of Automotive Engineers standard J2567.

The penalty for violating the sound levels for snowmobiles is a civil infraction, with fines up to $250.

This season, conservation officers on patrols in the western U.P. have issued tickets to numerous snowmobile operators whose sleds have well exceeded the 88-decibel limit, said the DNR’s Sgt. Ryan Aho.

“As a point of comparison, a train whistle at 500 feet is 90 decibels and sustained exposure at that level may result in hearing loss,” Aho said. “We encourage snowmobile operators to properly maintain their machines, and also discourage them from modifications that make sleds louder.”

Snowmobiles that do not comply with Michigan law for noise emission also can hurt the state’s trails program, said Ron Yesney, a recreation specialist with the DNR.

“Half of our snowmobile trails are on private lands and are there at the sole discretion of the landowner, and many pass through communities and very near to homes,” Yesney said. “Snowmobiles that exceed the noise emission levels are often a reason why we lose trail permissions on private land. Riders who modify their machines to make them extra loud jeopardize the enjoyment of our nationally recognized trails for all riders.”

Extreme cold conditions on Michigan’s waters are causing some trouble for Michigan’s waterfowl. The exceptionally cold winter weather of the past few weeks has caused the rivers and waters of the Great Lakes to freeze further into the center, similar to conditions experienced last year.

Large concentrations of ducks like canvasbacks, long-tailed ducks, redheads and scaup are gathering in the remaining areas of open water on the Great Lakes, including western Lake Erie, and on large rivers like the Detroit and St. Clair rivers. With so many ducks in a small area, and a fairly small amount of food, some of these ducks are becoming malnourished.

Many of the ducks congregating on these rivers and lakes are diving ducks, which rely on a diet of aquatic vegetation, mollusks and small fish. Much of the area on the water where these ducks are congregating is deep, and weed growth is minimal, so food for these ducks can be very scarce. The food that is available is depleted quickly by large concentrations of ducks.

The Department of Natural Resources urges the public not to attempt to rescue ducks. Though it is difficult to see wildlife in distress, ice conditions are unpredictable, especially near rivers where currents can be swift. Human safety is of the utmost concern.

The DNR does not expect these losses to negatively affect overall duck populations.