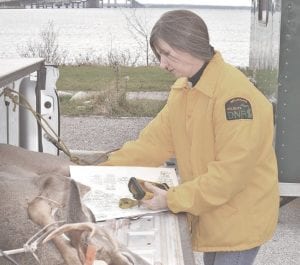 Sherry McKinnon, DNR wildlife ecologist from the Newberry office, checks in a buck

Heading north to hunt during the firearm hunting season? As part of its stepped-up chronic wasting disease monitoring efforts along the Michigan- Wisconsin border, the Michigan Department of Natural Resources will be operating new deer check stations in Wakefield and Watersmeet during the upcoming firearm deer hunting season.

“As our education and disease testing efforts continue, we want to increase our deer checks in this important part of the Upper Peninsula,” Bill Scullon, field operations manager for the DNR’s wildlife division at Norway. “We are lining up check stations along the Michigan- Wisconsin border.”

The DNR’s Wakefield deer check station is located at 1405 East US-2, while the Watersmeet check station will be a temporary station set up at the Ottawa National Forest Visitors Center, located east of the Intersection of US-45 and US-2 on US-2.

Each of the stations will be open during some days during firearm deer hunting season which runs from Nov. 15-30.

Chronic wasting disease, a neurological disease fatal to deer, elk and moose, has been found in several central Michigan counties in the Lower Peninsula. This deadly disease has also been found in Wisconsin, 30 miles from the Michigan border.

In addition to new regulations enacted recently to restrict the parts of deer, elk or moose that can be brought into Michigan from any other state or Canadian province, the penalties for doing so have also been increased.

Since May 2015, 1,360 deer have been tested for CWD in Gogebic, Iron, Dickinson and Menominee counties. So far, there has been no finding of the disease in the U.P.

The DNR encourages hunters in CWD-free areas of the state, including the U.P., to have their deer voluntarily tested by bringing them to DNR check stations. Eleven check stations are available throughout the U.P.

The DNR is also working with taxidermists and meat processors in continued CWD surveillance efforts. Wildlife biologists continue to check roadkill deer and those harvested under crop damage permits for CWD.

Educational campaigning will continue with billboards, fliers, public service announcements, press releases, social media messages and a 30-minute television program broadcast on public television. Messaging at the Mackinac Bridge will also be included in the effort to educate hunters and the public on CWD.

Hunting groups in the U.P. have worked hard to help the DNR’s efforts.

Find out more at www.mi.gov/cwd.