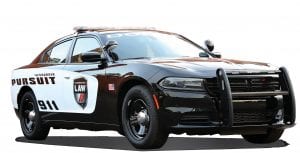 “As America’s high-performance police vehicle, Dodge Charger Pursuit is going big for 2016, offering a massive, Uconnect touchscreen system that streamlines a law enforcement officer’s computer system with our easy-to-use Uconnect system – on an all-new laptop-size 12.1-inch touchscreen display,” said Tim Kuniskis, President and CEO – Dodge and SRT Brands, and Vice President – Fleet Operations, FCA – North America. “Designed and tested to Charger Pursuit’s stringent test requirements, our all-new Uconnect 12.1 system is the latest piece of tactical hardware that is neatly integrated into the instrument panel for a mobile command center that could only be delivered from Dodge.”

Compared to the Dodge Charger Pursuit’s standard 5-inch display, the all-new Uconnect 12.1 features a 12.1-inch high-resolution touchscreen display that is more than five times larger in the center of the instrument panel. Uconnect 12.1 is ergonomically located and provides a large 1024 by 768 pixel display of Uconnect radio and vehicle controls, as well as the ability to toggle to a law enforcement officer’s computer via a menu bar at the top of the screen. 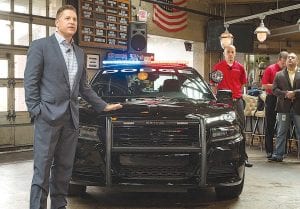 Designed for ease of integration and operation, the Uconnect 12.1 features a plug-and-play solution (Ethernet) to connect an officer’s mobile computer out of sight in the Dodge Charger Pursuit’s trunk. Uconnect 12.1 was also engineered and tested to work with an officer wearing gloves, plus extreme operating conditions as low as -40°C and as hot as 85°C.

The development of the 2016 Dodge Charger Pursuit’s all-new Uconnect 12.1 touchscreen system was a team effort, combining the expertise of Fiat Chrysler Automobile’s law enforcement vehicle design, engineering, fleet and Uconnect teams, plus its 19-member Police Advisory Board (PAB) to answer the call for an integrated mobile command center solution. 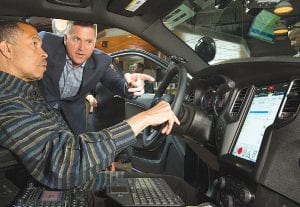 Advancements in law enforcement have put highly effective new tools in the hands of police. Laptop computers with data protection protocols have replaced two-way radios for the transmission of sensitive information, such as crime scene details and suspect identities. Police vehicles are jam-packed with additional displays, mounting brackets and keyboards that not only compromise comfort, they pose a risk to officer safety in the event of a collision.

Initial feedback found that a traditional, center console-mounted laptop or screen positioned be=tween driver and front passenger often added dangerous impact points or could even interfere with airbag deployment during a crash. In addition, these third-party upfit solutions were considered distractive to the officer’s outward vision and line-ofsight. Last, the ergonomics designed into the vehicle’s controls and even touchscreen displays were hindered by the installation of these bulky devices.