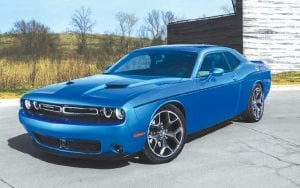 The horsepower wars are alive and thriving.

As an example, the Dodge brand shook the foundation of the Jacob Javits Center in New York with the exhaust note of its new 2015 Dodge Challenger 392 HEMI Scat Pack Shaker model during last week’s auto show reveal of its newest evolution of an American Muscle car.

“For 2015, we’re going deep with the remake of the Dodge Challenger,” said Tim Kuniskis, president and CEO – Dodge Brand.

“The iconic 1971 Challenger inspired the design of this modern- day muscle car, but the recreation of this classic styling extends well beneath the surface of the sheet metal.

“We have completely re-engineered the Challenger with a new best-in-class 485 horsepower 392 HEMI and TorqueFlite eight-speed transmission powertrain, an upgraded suspension, new class-exclusive technologies and a completely new interior.”

The 2015 Challenger is available in eight trim levels: SXT, SXT Plus, R/T, R/T Plus, R/T Shaker, R/T Plus Shaker, 6.4-liter Scat Pack and 392 HEMI Scat Pack Shaker (late availability for Shaker), Kuniskis said. Production is scheduled to begin in the third quarter of 2014.

Looking to the future, the standard specialty segment in which the Challenger competes is projected to grow substantially in the United States, Kuniskis said.

With nearly 430,000 units sold last year, the segment is up 10 percent since 2009 and is projected to grow more than 42 percent in the next five years, giving Dodge, and Challenger, a huge opportunity to grow with it.

New feature highlights on the 2015 Dodge Challenger include: