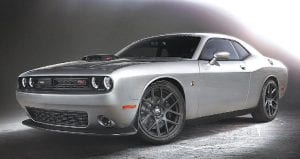 Dodge has put some muscle into its lineup with the return of “Shaker” muscle car models.

“We listened, and for 2015, the new Dodge Challenger lineup offers the legendary Shaker hood expanded to include our 485 horsepower Hemi V8 delivering up to 113 more horsepower than last year, plus even more track-proven hardware and technology – a combination our enthusiasts have been waiting for.”

As the model name suggests, the “cold-air grabbing” Shaker not only looks good with its Satin Black center-mounted hood scoop, snorkeling up from the engine compartment it also directs cooler air back into the 5.7-liter, or now 6.4-liter (392 cu.in.), Hemi V8 engine.

And, like the original 1970 Challenger R/T with the Shaker hood, the new 2015 Challenger models continue the Dodge tradition of an engine-mounted hood scoop that “shakes” with the powertrain’s movement, Kuniskis said.

He said Shaker models are designed for muscle car buffs “who can’t help but tinker with their toys.” The Shaker models feature a functional Shaker hood with Mopar cold-air intake, conical air filter and optimized air box for improved airflow and performance.

“Lift the hood and enthusiasts will also be treated to an under-hood ‘Shaker’ graphic – reminiscent of the 1970s original,” Kuniskis said.