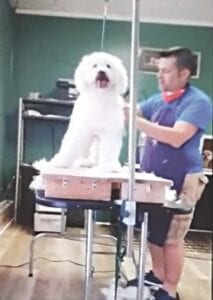 BURTON — A Genesee County dog groomer is facing one count of animal cruelty following an investigation by the Genesee County Sherriff’s Department into a video that surfaced of the suspect being rough with a dog.

Michael Pickard, 44, has been charged in the incident that allegedly occurred a year-and-a-half ago at Family Pet Daycare and Grooming in Burton.

If convicted, he could face up to 93 days in prison.

The animal abuse investigation started Feb. 8 after a video surfaced online showing a groomer being rough with a dog.

In a Facebook post, Pickard claimed the dog attacked him before he is shown being rough with the animal I the video. He said he was bitten, and the injury required 12 stitches.

In the post he apologized for making “a mistake” adding he “should not have even let it get that far.”

Sheriff Chris Swanson reported Pickard was taken into custody Feb. 7 and that other animals in his care were checked. Currently, there are no further charges.

Swanson asked the public to “trust that the process has to go in place” and he said the most important thing is protecting the animals.

Swanson has indicated in other reports there has so far been no evidence to support Pickard’s claim he was bitten.