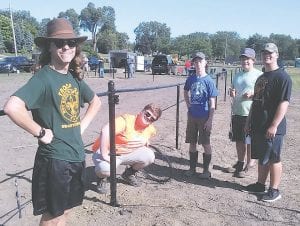 SWARTZ CREEK — After more than three years of planning and fundraising, the much-anticipated dog park is installed at Elms Park.

The dog park is the Eagle Scout legacy of Boy Scouts Ryan and Eric Melen of Troop 122, and the many, many donors who pitched in to make the project happen.

The scouts say they still have some work to do. Eric is working on getting the benches and doggy play equipment finished, and he expects to have everything installed within the next few weeks.

The accessories comprise Eric’s portion of the overall project. Ryan oversaw the construction of the fence Saturday and Sunday. The original build date was July 27, but there were unforeseen delays.

Now that the dog park is nearly complete, Ryan said it feels “amazing.” He said the experience taught him and his brother some valuable lessons.

“Dog parks are expensive, fencing is expensive, and fund raising is very hard,” he said.

The scouts raised about $10,000 for materials and other expenses. The total cost was about four times more than the scouts had anticipated when they first proposed building the play place.

The park, where dogs can run and play off-leash, includes a 70-foot by 140-foot section for large dogs, and a 70-foot by 70-foot area for smaller breeds. It is located in the southwest corner of Elms Park, near the sledding hill and ice-skating area.

The ground is elevated for better drainage, and leveled; the city will seed it for grass at a later date.

Accessories such as waste disposal receptacles, a bridge, tubes and benches, will complete the setting.

The scouts say they appreciate all the support they’ve received from the community.

Rules will be posted at the gates to remind dog owners that they are responsible for their pets’ behavior, and dogs that are aggressive and do not play well with others should not use the park.

Pet owners also are responsible for keeping the park clean and are expected to dispose of waste in the designated containers.