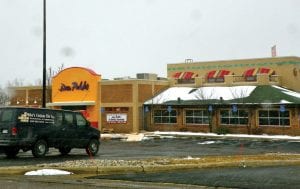 Renovation crews have been on site for several months to get Don Pablos restaurant ready to reopen after being closed by a fire last summer.

FLINT TWP. — Looks like the wait will soon be over for hungry fans of Don Pablos Tex-Mex restaurant, 3145 Miller Rd.

The popular restaurant has been closed since being damaged by a fire last July.

Since then, ‘when are you gong to reopen?” has been the chief question from inpatient fans on the restaurant’s Facebook page.

There’s no official reopening date announced yet but comments on the Facebook page allude to the end of this month.

One major hint was a hiring call for all hourly positions conducted April 1-5, according to an announcement on the Facebook page.

This week there’s an announcement inviting patrons to visit to enter a Cinco de Mayo (May 5) contest to win prizes including a trip to Mexico.

Major interior renovations have taken place since the restaurant has been closed, as shown in several photos posted on the Facebook page.

Restoration crews arrived on scene the day after the fire in July which local fire officials said was caused by a carelessly discarded cigarette in mulch outside the front door.

The stucco facade at the entrance was completely destroyed and the fire spread to the attic and interior walls, setting off sprinkler system that helped control the spread of the fire until firefighters arrived to extinguish it. Patrons and employees inside were safely evacuated but one firefighter who suffered from heat exhaustion while battling the blaze on the hot July day was treated and released.

It was the second fire at Don Pablo’s in just over a year. A fire in May 2011 also was attributed to a discarded cigarette butt igniting nearby brush.

Don Pablos has been operating at this location since 1994.