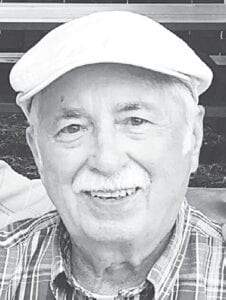 Don was born on October 14, 1936 to Harry and Evelyn (Cobart) Ashford in Owosso, MI. After graduating high school, he served in the United States Marine Corps from 1959 to 1963. He was stationed at the US Embassy in New Zealand. While there, he met Maureen Willman, whom he married in 1963 in Wellington.

Don worked at General Motors in Flint for over 30 years before retiring. During his life, he was an avid fan of Detroit sports and wore out several La-Z-Boys watching them. In addition to his love of automobiles, Don was also a meticulous gardener who took pride in his yard. He was a people person who could easily connect and befriend anyone and always made time for everyone around him. More than anything, Don was a devoted husband and father and he loved spending time with his family. He was a member of St. John’s Catholic Church in Davison.

Don is survived by his wife, Maureen Ashford; his sons, Gregory (Fannan) Ashford and Scott (Patchalee) Ashford; his granddaughter, Megan, whom he adored, and granddog, Chip; and many nieces, nephews, great-nieces, and great-nephews.

At Don’s request and observing pandemic safety guidelines, no viewing or service will be held. In lieu of flowers, a donation can be made to the Wounded Warrior Project.