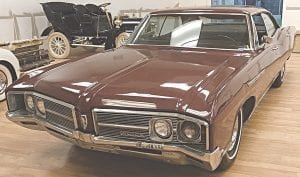 FLINT — Sloan Museum has added a 1968 Flintbuilt Buick LeSabre to its Automotive Collection, generously donated by Carol and Jim Lenas. The Buick carries a family history with it, and will help the museum to present stories about family life, travel, migration, automotive culture, consumer culture, and more.

Carol Lenas’s father was a Colonel in the Army, stationed at Detroit Arsenal Army Base in Warren, in 1968, when the family purchased the LeSabre at a Detroit dealership for about $8,000.

“We got a deal because the 1969s were arriving and the dealership wanted to clear out the old inventory,” Lenas said. The family drove it around the country as they moved from Michigan to Virginia and Alabama, and vacationed with a pop-up camper in tow.

All told, the LeSabre has traveled to 48 states.

The car was also passed through the family as children learned to drive, and they took turns using it while away at college. “The three daughters in our family each learned how to drive the Buick in the ‘70s in Alabama,” Lenas said. “I had to take my driver’s license test in it and parallel park. Not an easy feat for such a long car!” Sloan Museum is honored to be the custodian of these memories and will preserve the 1968 LeSabre in its current state, since the wear and tear is so integral to its story.

“It’s very unique in our collection in that it has a very personal story and one that I think many people can relate to,” Sloan Museum’s Curator of Collections Geoff Woodcox said. “The LeSabre captures something that’s a part of many people’s lives—the kids learning to drive, family vacations, etc. It’s got dings, scratches, and rust, but that’s part of the story, too. It isn’t a showpiece; it’s a working family car and is one-of-a-kind in our collection.”

Sloan Museum’s hours are 10 a.m. to 5 p.m. Monday through Saturday and 12 to 5 p.m. Sunday, at both the Flint Cultural Center and Courtland Center Mall locations. Admission for Genesee County residents is $3 per person at the Courtland Center Mall location, thanks to support from the Arts & Culture Millage. Admission to the Flint Cultural Center location is free to all through Dec. 9, thanks to support from the University of Michigan-Flint, the Community Foundation of Greater Flint, and the Ruth Mott Foundation. For more information, visit SloanMuseum.org. — G.G.