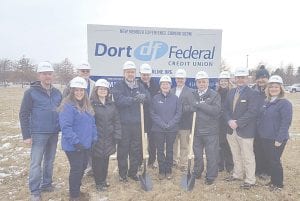 Dort Federal’s board members, executive team, and representatives from Vienna Township were in attendance.

“We are extremely happy that Dort Federal Credit Union has the opportunity to serve our current and future members in the Clio and the northern Genesee County area. While we may be building a facility, more importantly we are building lasting relationships in the community. We take a great amount of pride in what we do in the community and we are very excited to be here,” said Vicki Hawkins, CEO of Dort Federal Credit Union.

This new facility will bring a new member experience with state-of-the-art technology.

This was the second groundbreaking ceremony held recently by Dort Federal. On Dec. 19, the credit union also announced they will begin the construction of a branch located in Swartz Creek. Construction is to begin soon at both locations, and is projected to be completed in the summer.