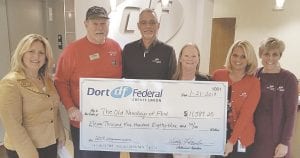 The 2018 beneficiaries, selected by Dort Federal Credit Union employees, will split proceeds totaling $23,178.50 between the the Old Newsboys of Flint and Ele’s Place.

“It is very important for us to have corporate sponsors, such as Dort Federal Credit Union, to help make the Holidays brighter for needy children in our community,” said Old Newsboys of Flint Executive Director Chris Hamilton.