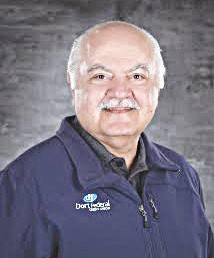 GENESEE COUNTY — After 29 years of volunteer service, Dort Financial Credit Union Chairman of the Board, Harith “Harry” Awdish has died.

Dort Financial Credit Union issued a statement Thursday which said they mourn the loss of Awdish, 61, who died peacefully at his home Nov. 29.

“Harry Awdish’ s accomplishments as Chairman were surpassed only by his passionate commitment to the Credit Union during his tenure for the past 29 years. He worked tirelessly to represent our membership and fulfill his obligations as director and Board Chairman” said Vicki Hawkins, President and CEO. “He will be missed greatly by his beloved family, his colleagues whom he admired and respected, his friends, and by all in the Credit Union industry.”

In addition to serving as Chairman of the Board, Awdish served in several different capacities, beginning in 1991 as a credit union volunteer.

He was named Volunteer of the Year by the Combined Council of Automotive Credit Unions in 2008.

Awdish’s legacy will live on, as the Credit Union is committed to his conservative, consistent, member-focused philosophy and honor his commitment to build Dort Financial as a strong and successful Credit Union, the statement from Dort Financial said.

A Private Mass of Christian Burial will to be held at St. John the Evangelist Catholic Church with burial to follow at St. John Catholic Cemetery. Rev. Fr. Andrew Czajkowski officiating.

Harry was born in Baghdad, Iraq on March 23, 1959, the son of the late Salem S. and Victoria K. (George) Awdish. He married Francesca D. Ragnone on November 19, 1983 at All Saints Catholic Church. He graduated with a Master’s Degree from the University of Michigan- Flint, he worked for General Motors for 42 years. He has served as a volunteer at Dort Financial Credit Union since August 1991 – an amazing 29 years.

While at Dort, he served on the credit and supervisory committee, and spent 13 years as Chairman of the Board of Directors.