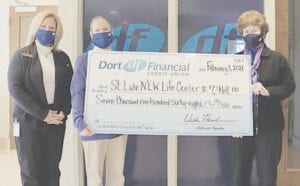 The 2020 beneficiaries, selected by Dort Financial Credit Union employees, split the proceeds totaling $15,936. Funds were raised in the months of November and December from credit union members and team members.

On Feb. 3, Dort Financial Credit Union presented representatives of The Child Advocacy Team and the St. Luke N.E.W. Life Center with checks in the amount of $7,968 to each organization.

Dort Financial Credit Union has contributed to the Annual Snowman Sales campaign through donations received from members throughout the holiday season for more than 20 years. By purchasing a paper snowman in-branch, members are given an opportunity to make a positive impact on a local charity. — G.G.