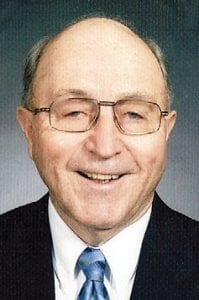 Don attended Royal Oak High School with his twin brother, Harry, where they were members of their 1944 high school State Championship Cross Country team. His high school diploma was received in 1947, after he returned from serving our nation in the United States Navy during World War II. Don married Norma Alexander on May 25, 1958, in Washington, Indiana. Don and Norma spent 53 loving years together; 43 years in Grand Blanc, Michigan. Don received his B.S. degree from Eastern Michigan University in 1951. He pursued his graduate education at the University of Michigan, earning his Master’s degree in 1954, and his PhD in 1965 from Michigan State University. Don’s dedication to his students and to his community was evident throughout his life. Dr. Stanbury’s career in education followed many paths. Principal of Leonard Public School 1951-1952, teacher and coach at Jane Adams 1952-1955, counselor and coach at Royal Oak Dondero High School 1955-1957, Asst. Principal and counselor at Royal Oak Kimball High School 1957-1963, Asst. Dean of Mott Community College 1963-1965, Dean of Personnel for Mott 1966-1969, Principal at Warren Cousino High School 1969-1976, Asst. Principal at Warren High School 1976 until his retirement in 1992. Don led a productive life after retirement. He served as a founding Board Member and Mediator for the Community Dispute Resolution Center. He enjoyed serving on the Board of Directors of the Bruin Club of Genesee County (Mott Community College). He proudly served as their Club President from 2005-2009 and was given an award of recognition for his many accomplishments and his dedication to MCC. Don was a member of the Elks Lodge of Flint, the American Legion and Grand Blanc United Methodist Church. Don loved sporting events. He enjoyed attending Central Michigan football games, Mott basketball games, Grand Blanc High School football, basketball and track and cross country meets. He loved working out at Hurley Health & Fitness Center and was proud to be on their “Wall of Fame.” Don enjoyed people, watching old movies, and cars. He especially loved driving around town, visiting and talking with friends in the community and spending time with his family and grandchildren.

Dr. Stanbury was preceded in death by his parents, Muriel and Edward Stanbury; and his twin brother, Harry.

The family thanks the staff, doctors and nurses of the ICU at Genesys Hospital.

Contributions in memory of Dr. Stanbury may be made to; Grand Blanc United Methodist Church, The Bruin Club of Genesee County (Mott Community College), and the Community Dispute Resolution Center, (www.thedisputeresolutioncenter.org).

Condolences may be sent to: www.hillfh.com You can also view our obituaries online at www.mihomepaper.com