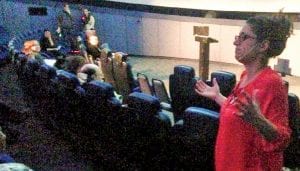 Hanna-Attisha: Dr. Mona Hanna-Attisha walks around the crowd in Longway Planetarium to answer audience questions for the final 15 after her presentation.

FLINT — Dr. Mona Hanna-Attisha – the pediatrician who brought studies of lead levels in the Flint Water Crisis to the attention of the state and public – held a lecture titled “Lead in Families” last Thursday at the Longway Planetarium to discuss the methods families can take to ensure a bright future for their children.

In attendance were concerned residents of the city and members of the media – after the presentation, Hanna-Attisha opened the floor up for questions.

“The take home message will be one of hope,” said Hanna-Attisha before the presentation.

She began with a timeline of what happened before moving into slides centered on evidence-based intervention. Included were the charts and graphs presented at the press conference announcing elevated levels of lead in the citizens of Flint, one of which indicated Flint had already had significant disparity in levels of lead compared to surrounding areas even before the switch from Detroit water.

Hanna-Attisha identified three areas the medical community is working on to reinvest in Flint: One is a reassessment of the exposure, going back to take heel samples from newborns and look at fetal complications; second is long-term monitoring over a span of 20 years, doing routine checkups on well-being of the children as they age; and third, which was the main focus for the latter half of the night, was advocating for interventions.

“When we look at these kids in 20 years, we want to say ‘Wow, look at how great they!’” said Hanna-Attisha. “We cannot sit back.”

A major component of these interventions is combatting Adverse Childhood Experiences (ACES) worsened by exposure to lead through encouraging reading, singing, playing and studying in families, and investing in Head Start, universal preschool and early literacy programs.

Health and nutrition, she said, are the other major areas of focus. Instead of having one school nurse for all of Flint, as was the case before the water crisis, the supplemental budget enabled the district to employ nine others.

Hurley has recently partnered up with the Farmer’s Market to begin prescribing fruits and vegetables, complete with a $5 gift card to purchase food. Hanna- Attisha also encouraged regular doctor check-ups to make sure children are on the right track regarding their health and food intake.

She said Hurley is working with the starting up cooking classes to demonstrate healthy meals, the food bank is gathering items rich in iron, calcium and Vitamin C and the Michigan Dairy Farmers Association donated 12,000 gallons of milk for the cause.

“If you are fully loaded with nutrients, your body doesn’t absorb lead as readily,” said Hanna-Attisha.