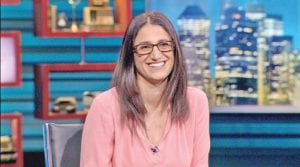 FLINT — TIME named Dr. Mona Hanna-Attisha, director of the Michigan State University and Hurley Children’s Hospital Pediatric Public Health Initiative to the 2016 TIME 100, its annual list of the 100 most influential people in the world.

The full list and related tributes appear in the May 2 issue of TIME, available on newsstands on Friday, April 22, and now at time.com/time100-2014.

The list, now in its 13th year, recognizes the activism, innovation and achievement of the world’s most influential individuals. As TIME Editor Nancy Gibbs has said of the list in the past, “The TIME 100 is a list of the world’s most influential men and women, not its most powerful, though those are not mutually exclusive terms. While power is certain, influence is subtle. As much as this exercise chronicles the achievements of the past year, we also focus on figures whose influence is likely to grow, so we can look around the corner to see what is coming.”

“Dr. Mona,” – as many call her, captured the 20th spot in the top 100 list, or 1.1 percent of the vote total, alongside U.S. Sen. Elizabeth Warren, talk show hosts Stephen Colbert and John Oliver, and German Chancellor Angela Merkel.

“I am honored and humbled to be on the TIME 100 Most Influential People list. However, the most influential people in my world are the people of Flint – the smart, strong and resilient people of Flint that are approaching their third year of unsafe water. I hope this recognition continues to bring awareness to the ongoing Flint Water Crisis, and the very human story behind the crisis. I would like to thank TIME magazine for the honor and everyone for their votes and extensive support,” adds Mona Hanna-Attisha, MD, MPH, FAAP. Dr. Hanna- Attisha now directs the Michigan State University and Hurley Children’s Hospital Pediatric Public Health Initiative, a model public health program aimed at improving the lives of all Flint children.

“We are very proud of Dr. Mona Hanna-Attisha for the outstanding work she has done to help the children and families of Flint,” said Aron Sousa, MD, interim dean, MSU College of Human Medicine. “Her science and advocacy demonstrate why public intellectual institutions like hospitals and universities are important to the health and safety of Americans. It is nice that Time has recognized Mona, but her work and energy have made us very proud already.”