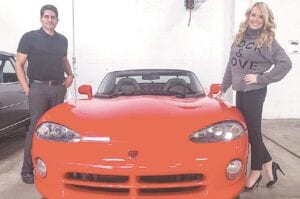 FLINT — For the past three years, Flint surgeon Dr. Bobby Mukkamala has invited the public to view his private car collection as part of the annual Cars & Bars fundraiser.

This year, Mukkamala is taking the event online to help raise funds for the Sloan Museum and the Flint Institute of Music (FIM).

On Oct. 28, Mukkamala and guest host Lisa Marie from Cars 108 will present a virtual tour of his vast car collection in Flint. The tour will run from 6 p.m. to 7 p.m., featuring a behind-the-scenes look at Mukkamala’s vehicles and the backstories behind them.

“Guests will get to see a collection that they might have heard about from friends and enjoy the personal stories I’ll share of how I ended up with the cars,” Mukkamala said. “They can also share their own car stories and ask questions…all from the comfort of their homes.”

Mukkamala’s diverse collection ranges from muscle cars to vintage collector vehicles and includes many conversation starters, such as a 1957 Mercedes, a 1940s fire engine and the first H1 Hummer model produced for civilian use. One of his most prized vehicles is a 1986 Ferrari Testarossa driven by Sonny Crockett in the landmark 1980s TV series “Miami Vice.”

Mukkamala said that his passion for car collecting began when he was a teenager. He would fill his room with posters of iconic sports cars and flip through “Car and Driver” and “Motor Trend” magazines, visualizing the day when he could purchase his own hot rides.

Mukkamala acquired his first collector car shortly after he completed medical training and started his surgical career. Before long, he had to build an extra garage onto his house to support his growing hobby.

“I thought there was no way I would have more than a few cars at a time,” he said. “Of course, numbers seven and eight soon came long.”

Eventually, Mukkamala’s collection grew so large that he had to purchase a private garage in downtown Flint to house it. His fleet is now up to 75 cars and counting.

When several people offered to pay him to see his automobile collection, Mukkamala came up with the concept for the Cars & Bars fundraiser to benefit two of his favorite Flint area cultural destinations: Sloan Museum and the FIM. Cars & Bars is named after the Sloan Museum’s car collection and the bars in written music, representing the FIM.

“I never wanted to take money to show off my hobby, so I thought this would be a great way to have donors direct their generosity elsewhere,” Mukkamala said. “I’ve always been a big supporter of the cultural center and wanted to draw awareness to two great institutions like Sloan Museum and the FIM.”

Tickets for Cars & Bars are $25 per person and can be reserved at sloanlongway.org/CarsBars. VIP tickets, which include an exclusive sneak peek at 5:30 p.m. on Oct. 28, are $100. A virtual event link will be provided to registrants.

All proceeds from Cars & Bars benefit the Sloan Museum and Flint Institute of Music’s programs, engaging future generations in STEM, history and the performing arts.