Dragons routed by DeWitt in hockey 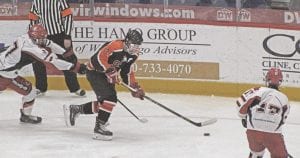 DEWITT – The Swartz Creek/ Clio/Flushing varsity hockey co-op had hoped for a better outcome in Saturday’s game at DeWitt, but was pinned with a 10-2 defeat.

Lighting the lamp for SCF were Nik Calugaru and Mitch Carlson, which turned out to be SCF’s only goals.

“Our team played hard with good hustle and effort from everyone,” said SCF coach Ben Guzak. – SCF opened up the season last Wednesday at Iceland Arena with an 8-1 loss to the Alliance (LakeVille/North Branch/ Goodrich/Imlay City/Almont). SCF’s lone goal was netted by Kam Houle with a helper from Brendan Ogle.

“We came out a little nervous in the first period and allowed four goals against,” said Guzak. “Our second and third periods were much better. Our team settled into the game and made a lot of good plays both offensively and defensively.”