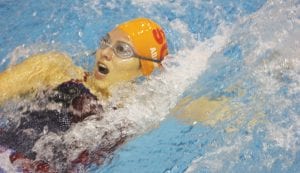 Swartz Creek/Flushing’s Selena Adams was second in the 100 backstroke at the Flint Metro League meet at Brandon High on Nov. 7.

ORTONVILLE — The Swartz Creek/Flushing varsity swim and dive team was in action at the Flint Metro League meet Nov. 5-7 at Brandon High finishing second with a score of 348.5, placing them behind Fenton with 730.5 points, but ahead of Holly with 284 and Brandon with 248. Taking fifth with 226 was Kearsley.

While Swartz Creek/Flushing didn’t have any winners, coming in second in the diving was Katelyn Niezgucki with a score of 381.5 and Selena Adams was the runner-up in the 100 back in 1:04.36. Alena Benjamin, Maddy McKown, Delanie Moulton and Adams took second in the 200 free relay in 1:50.76.