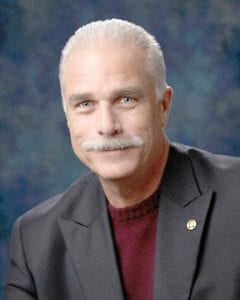 GRAND BLANC TWP. — This fall, with hardly an indication it’s happening, residents will be getting their water from the KWA, or Karegnondi Water Authority, but the change shouldn’t be noticeable according to Genesee County Drain Commissioner Jeff Wright, who recently spoke at the Grand Blanc Community Homeowners Forum.

Besides answering residents drain related questions, Wright explained he believed the main impetus behind the beginning of the KWA, was the two-fold, consistent rate hikes from Detroit who was providing the water, and a letter they sent threatening termination several years ago.

Wright explained Genesee County officials tried for some time to work with Detroit, now known as the Great Lakes Water Authority (GLWA) on a partnership for a new pipeline.

The old pipeline had broken down four times and the need for a second one was clear, Wright said, especially as DWSD had never complied with the federal guideline of having a backup system.

Now, he explains, GLWA is going to be buying from them instead, and KWA will also serve as Flint’s required backup water system.

Selling that water is expected to generate $30-60 million over the next few years, Wright said and despite the project cost being $300 million, Wright said residents need not anticipate a rate hike for the foreseeable future, as current payments have and will continue to fund the project.

Besides many miles of pipeline that run from the bed of Lake Huron all the way to GCDC’s brand new water treatment plant, their site includes both their main reservoir and the 14-day backup supply for Flint.

Built near the Genesee and Lapeer County line, the massive reservoir is 32 acres and holds 250 million gallons, ensuring a long-term safe water supply for all residents served by GCDC.

Water will not pass through the Flint system but will be available to them on an emergency basis.

Flint is currently in the process of contracting with GLWA and their costs for water are currently being funded by their current water customers as well.

When asked, Wright also went into detail about what he believed were the reasons behind the Flint Water Crisis and that he had many times publicly warned them against using the Flint River for multiple reasons.

In July, residents can expect to find more information about the switch to KWA on their semi- annual water quality report mailed to all homes in the county. He reiterated when the process goes through, residents shouldn’t notice any difference.

The water source and treatment will be the same, it will just be going through the new plant which is expected to be completed in next month or so. They will then begin a long test period, longer than normal he explained, to ensure there is no doubt at local, state and federal levels about the quality of the water.

They expect to have it coming out of local taps by October. There is a detailed report of the KWA project as it currently stands on their website at: www.karegnondi.com/, the link is: media.wix.com/ugd/60e74e_ ce6c4422a86c4edebff99f7209ae6e00. pdf. The site contains many other useful links as well.