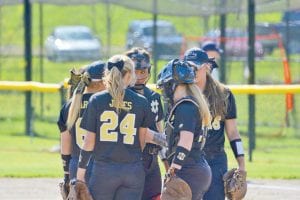 Lapeer and Genesee county rivals, now playing as teammates, huddled up at the pitcher’s circle as part of the Mott Community College women’s softball team that put together a record-breaking season in 2016.

Lapeer’s Kaylyn Buzzell and Hunter Conzelmann along with Jackie Jones from North Branch and Stephanis Jurgess of Brown City were among the crop that Studaker harvested over the past two years. They, along with their Genesee county teammates, Mallory Markwardt of Davison, Liz Waterworth of Grand Blanc, Emily Nestor of Flushing and Andrea Miron of Kearsley helped the Lady Bears clinch the Michigan Community College Athletic Association-East title with a 26-2 record, the third league title in five seasons. Mott was also 44-8 overall setting a new record for most wins in a season. Its 43 home runs also set a new school record.

“Not only did this group excel on the ball field, it kicked butt in the classroom with a 3.64 team GPA and is Academic All American for the 2015-16 school year,” said Studaker. “Besides some obvious talent, our strength was our team unity and the closeness between players. This was close to being a dream season.”

The Lady Bears aren’t done yet, though, as Mott won the Region 12 tournament in Columbus, Ohio May 11-13 to qualify for the national tournament that took place this past week in Clinton, Miss. It was Mott’s second regional crown in five seasons and second trip to nationals.

At the national tournament, Mott won one and lost twice in the 16-team field.

Studaker had plenty to say about the local talent he has hand-picked and what they brought to the program.

Buzzell, a sophomore catcher, did more than just her job behind the plate.

“Kaylyn took a leadership role this year and played a big part in our team’s success,” Studaker said.

Conzelmann, the freshman pitcher and first baseman made a smooth transition from high school ball to the collegiate game.

“Hunter is one of our three mainstay pitchers and batted fifth much of the season,” said Studaker. “She’s a determined competitor who was solid as a hitter, pitcher and fielder.”

Jones, who was a standout on the North Branch softball team, is another freshman who proved her mettle.

“Great glove and reflex at third base,” stressed Studaker. “She has the fourth-highest batting average on the team. She has exceptional athletic skills and is a hard-nosed competitor,” said Studaker.

Jurgess, another sophomore, has risen to the top offensively.

“She had a great sophomore season toward the top in all major offensive categories. An infielder by trade, we put her in right field and watched her develop into a outstanding outfielder. A true pleasure to coach,” said Studaker.

The girls from Genesee County had just as impressive seasons for Studaker.

“Mallory Markwardt, a Davison grad and Mott freshman, struggled with injuries but still did her part.

“She was our designated pitcher who struggled with injuries, but still had a productive season at bat. She can hit for power,” said Studaker.

“We moved her to second base where she was clearly the best defensive player in our league along with Sarah Mousseau from St. Clair County Community College,” explained Studaker. “She batted second because she was not only a very good hitter, but she is also an excellent bunter and baserunner. A very valuable player for us and consistently good all season long.”

Grand Blanc’s Liz Waterworth, a sophomore, was one of the three mainstay pitchers.

“Liz was one of three outstanding pitchers this year,” said Studaker. “She was a key contributor in the circle for us as a freshman and sophomore. She’s a hardworker and tough competitor.”

Because of their stellar season, Studaker’s player earned numerous accolades in the end-of-season voting. Freshman pitcher/first baseman Amariah Wright, a Frankenmuth grad, was named the Player of the Year for MCCAA-East. She and sophomore shortstop Kayla Ward, of Lake Fenton, were named to the First Team All-Region team and to the All-Tournament Team along with being named to the First Team All- Conference squad. Jurgess and Conzelmann were also named to the Region All- Tournament Team and earned Second