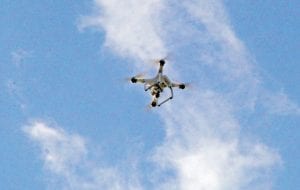 A drone flies over the field during an All-Star football game at Davison High on June 11.

GENESEE COUNTY – In what has become an increasingly bigger issue within the sports world, drones flying over athletic venues has reached the high school level. For the past two school years, the Michigan High School Athletic Association has put a ban on drones at MHSAA-sanctioned events for a variety of reason.

“This is the second year that we’ve had a ban on drones at tournament events and it was something that came on to our proverbial radar in the fall of 2014,” said John Johnson, communications director for the MHSAA. “As we started to get telephone calls from our schools, from members of the media and other people inquiring about the appropriateness of drones at school events. What really highlighted it is when we were sitting in a meeting at Michigan International Speedway, getting ready for our cross country finals, and the topic came up and the folks at MIS told us about their ban on drones.

“So we researched it some more and we put something into effect immediately at that point in time. Right now, that’s where it stands. At any of our tournament venues, drones are prohibited from being used by any party; a participating school, a spectator, even the media.”

The first major issue with drone activity at athletic events is obviously the safety. A drone can malfunction at any time, and some may be equipped with weapons or other means of causing people harm.

“The primary risk is safety,” said Johnson. “What one of the media people who called me on this described to me was their staff being out at high school football games and seeing drones fall out of the sky near the field. It wasn’t theirs, but they raised the question based on that, and it is a liability issue. If one of those things were to come down out of the sky or fail for whatever reason and strike anybody in the stadium, that’s a huge liability risk. And that’s why so many other venues have the same policy that we have regarding drones.”

Aside from the possibly hurting anyone at a venue, there is also the issue of using it as a way to scout an opponent. In fact, there have been allegations from schools that a rival may be spying on their practices via drone cameras.

“There have been charges of that,” said Johnson. “People wondering if drones that they’ve seen near their practice session were from an opposing school, but again, now you’re talking about something that’s out of our range; that’s out of our jurisdiction. What we control are tournaments. So the only place where we can do something right now and really enforce it is at our tournaments, not at regular season school events and certainly not at practice.”

Locally, Almont Community Schools adopted a similar policy banning the use of drones at practices and contests. Others are likely to adopt similar policies as the topic comes up again and again before fall practices.