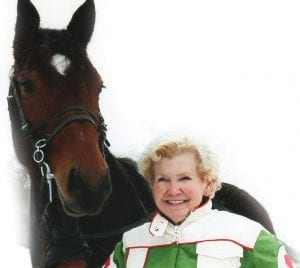 Yvonne Sova with the horse from Mike Sweeney’s harness racing farm in Davison.

FLINT TWP. — Her Harley- Davidson motorcycle jacket and souvenir hat from 2003 Bike Week in Daytona Beach is your first clue that Yvonne Sova, 74, is not your typical grandmother.

Her “bucket list” is not typical either. That’s a “things you’d like to do before you die’’ list popularized in a 2007 movie of the same name.

Sova recently crossed an item off of her list when she climbed aboard a twowheel, horse-drawn sulky for a ride around the track at Mike Sweeney’s harness racing farm in Davison. Better still, her adventure was captured on film and chronicled this month in the March-April issue of AARP magazine — the version sent to people ages 70 and up.

Sova’s hankering for harness racing began about 21 years ago on a visit with her husband to the newly opened Sports Creek Raceway in Swartz Creek, which was not far from their home in Rankin.

“I first saw the trotters out there when (Sports Creek) first opened up,’’ said Sova, who moved to Flint Township about two years ago. “It just looked exciting. I said I’d like to do that someday.’’ 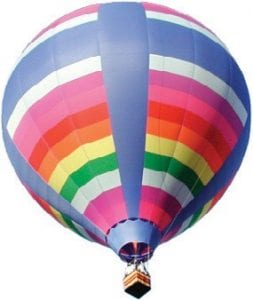 Her chance came last year when acquaintance Sara Davidson — a wellknown journalist, novelist and screenwriter — told her that AARP was looking for stories about people looking to fulfill a longtime dream. Davidson told her that about 95 percent of submitted ideas are rejected so Sova’s acceptance was quite a coup.

Next, Sova’s search to find a place to accommodate her dream ride led her to Sweeney’s farm — recommended by another friend with connections to the Sweeney family.

The big day arrived late last fall on the day after a big snowfall. Sova bundled in several layers of clothing and a racing suit loaned by Sweeney climbed aboard a sulky pulled by a $50,000 racehorse named Thunder. It’s a wobbly perch about the size of a tractor seat with not much else than a bar to brace your feet, Sova said.

But with Sweeney holding the reins, she made several laps around the standard sized track for her coveted ride. Sova decided against taking the reins herself because she did not want to be responsible for injury to the expensive racehorse. The horses are well-trained and highly responsive to the slightest tug on the reins, she said.

AARP sent a photographer to capture the ride and Sara Davidson wrote the article.

“Yeah, it left me wanting more,’’ Sova said of her ride. Sweeney was very accommodating and invited her to come back anytime, she said.

As for her bucket list, Sova’s far from done. She wants to hike to the bottom of the Grand Canyon and ride her motorcycle to all 50 states. She’s already scratched off a hot air balloon ride and the trip to Daytona Beach. She’d always wanted to go to the annual biker’s event which draws about 500,000 motorcycle riders, but her husband was never interested.

Sova taught herself to ride a motorcycle after her husband died 15 years ago. Now motorcycle road trips are standard for Sova who is a member of the Women on Wheels motorcycle organization. She took a solo ride to Missouri a few years ago after a companion backed out, a ride to Vermont last year and a trip along California’s winding, scenic Pacific Coast Highway about two years ago.

“You never know what you can do until you do it,’’ Sova said. “I’m not trying to prove anything.’’

Sova has five children, eight grandchildren and three great-grandchildren. They tell her to be careful but don’t worry about her because most of her children also ride motorcycles, she said.

Her harness adventure in Davison led her back to Sports Creek. At Sweeney’s farm, she met Phil Stommen, track representative for the Michigan Harness Horsemen’s Association based in Okemos. He posted a video of Sova’s ride on the association’s website. He also invited Sova and a friend to watch one of his horse’s race at Sports Creek. Sova got to ride in a pace car which starts the races and to stand in the winner’s circle when Stommen’s horse won.

When she’s not having adventures, Sova also works as a caregiver, teaches meditation and does freelance writing for local magazines. She’s also president of the HealthPlus Toastmaster’s Club, based in Flint Township. She will be teaching a meditation class on sound healing April 16 at the Life Enrichment Center at Lennon and Dye roads in Flint Township at a cost of $10 per person.