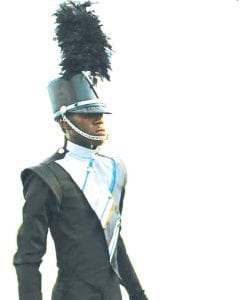 “Some people might think being with the same people 14 hours a day for 65 days would be hard to deal with,” said T’Kal, who returned home Sunday. “It was sometimes but was really great (overall) and the level of commitment on the field was very high.” T’Kal’s tour wrapped up last week with performances at the DCI Open Class World Championship, held Aug. 5-10 at Ames Field in Michigan City, IN. T’Kal’s group placed 8th in the open class competition and 24th in the open world class finals, competing against other groups from all over the country. It was a life-changing experience for T’Kal who said he made many of what he is sure will be lifelong friends. “I learned that hard work does pay off,” he said. He is the first CAHS student to

FLINT TWP. — T’Kal Clay, a senior at Carman-Ainsworth High School, has an awesome “how I spent my summer vacation,” story to tell when school resumes in a few weeks.

Many will recognize him as one of the drum majors for CA’s outstanding Blue Brigade Marching Band.

But over the summer, T’Kal had an opportunity to tour with the Kalamazoo-based Legends

Drum & Bugle Corps, which traveled throughout the Midwest and to the East coast to perform in shows, parades and competitions.

Originated in 2007, Legends is the Open Class Division of Drum Corps International (DCI), a non-profit organization that is considered to be “Marching Music’s Major League,” said Benjy Jones, C-A director of instrumental music and of the marching band.

A Drum Corps is made up of only brass instruments, percussion and color guard and includes students of all ages from 13- 22, he said.

Legends had 18 regular season performances throughout the summer. The Drum Corps travels throughout the night to the next performance city and spends most of their days rehearsing respective shows and then performing in the evening, Jones said. march with Legends Drum & Bugle, Corps, while still in high school, said Jones, who added that that at least two other C-A music students have toured with Legends after graduation.

T’Kal’s opportunity came about as a result of an opening last May in Legends Corps for a tuba player, which he also plays in C-A marching band. He is also a member of C-As Symphony Band.

T’Kal will be entering his sixth year (he began in 7th grade) as a member of the Blue Brigade marching band and his second season as one of the Drum Majors, Jones said.

T’Kal won his Drum Corps opportunity on the basis of an Impressive audition, Jones said.

T’Kal’s advice to fellow music students interested in touring with Legends is “go for it. You never know until you try.”

See T’Kal and the Blue Brigade in action on the field at C-A’s first Home football game on Aug. 29.