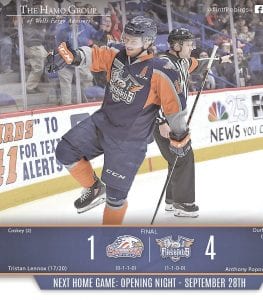 SAGINAW — Notching that first win always feels good, but it’s even better when it comes against your rival. The Flint Firebirds improved to 1-1-0-0 with a 4-1 victory over the Saginaw Spirit at the Dow Event Center on Saturday.

Flint fell behind late in the first, as Saginaw’s Cole Coskey netted the first goal, but then Jake Durham caught fire. He scored the first of his three goals with less than a minute left in the first period and then added the eventual game-winner at 8:23 of the second.

Brennan Othmann fired home his first goal of the season, which was followed late in the game by Durham, yet again. He completed the hat trick with an empty net tally with just nine seconds remaining in the contest.

Anthony Popovich was in net for Flint, turning aside 34 of the 35 shots sent his way. 22

Friday’s season opener was not as fortunate for the Firebirds in a 6-3 loss at the Sault Ste. Marie Greyhounds.

The Hounds opened with a 2-0 first period and crafted a 3-0 lead just 4:38 into the middle stanza. That’s when Flint decided to make things interesting. Durham scored his first of the season less than two minutes later, and then 17 seconds after that, Connor Roberts brought the Firebirds to within one.

It wasn’t meant to be, though, as Soo extended it back to a two-goal lead midway through the second frame and added another early in the third. Cody Morgan’s goal chipped at the deficit, but the Greyhounds buried one more in the third to pull away.

Through two games, the Firebirds are 1-1-0-0 for two points, currently placing them fifth in the Western Conference. They’ll have their home opener on Saturday against the Niagara IceDogs before hosting the Sarnia Sting on Sunday.