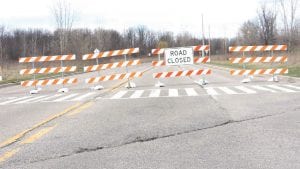 FLINT TWP. — For the 6,000 or so motorists accustomed to using Dutcher Road to reach the back entrance of Genesee Valley Center shopping mall, or conversely, to go to Wal-Mart, Sam’s Club, Home Depot and other stores on Corunna Road — there is bad news and worse news.

The bad news is that on March 31, the badly deteriorating road was closed down and blockaded by the Genesee County Road Commission.

Worse news is that it may remain closed until August or September.

The road was closed due to failure of the roadway around the curved area that presented a potential safety hazard, said Fred Peivandi, county highway engineer. The pitted, rutted section caused drivers to slow to a crawl while crossing the section.

Water and sub-drainage caused the failure of the roadway, Peivandi said.

The Road Commission has started work on a proposal to bid reconstruction work for the road in May and award it in June with the goal of completing the project by August or September, he said. The repair work was not scheduled this year but the road commission has planned resurfacing Dutcher from Corunna Road to Dye, he said. Last year’s traffic count on the road was about 6,200 cars per day.

For several weeks prior to being closed, Dutcher had been posted on both ends with “rough road ahead” caution signs. Last year, the road reached a similar nearly impassable state but eventually the potholes were patched over well enough to drive over.

The spring 2016 return of deplorable road conditions on Dutcher was discussed at the March 21 Flint Township Board of Trustees meeting. Township Supervisor Karyn Miller said at that time she had asked the road commission to put out the warning signs. She said she was told then that Dutcher was on a list for repairs but did not know when those repairs would be made.

Two weeks later, heavy rains and freezing and thawing weather apparently took their toll on the worse section of the pitted road.

At the April 4, township board meeting, Police Chief George Sippert said some motorists have persisted on getting round the road blocks by driving across lawns of homes on Dutcher Road. He warned that police officers will be enforcing the road closure. Motorists are advised to seek alternate routes until further notice.