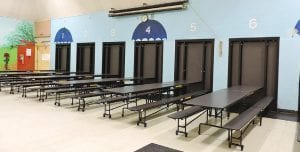 Randels Elementary was supposed to get them too but will have to wait a while longer because the measurements were wrong and their tables will have to be reordered.

The project was bid out in August 2013 and the school board approved the low-bidder in January of this year.

Two bids were received and Shiffler Equipment Sales of Ohio submitted the low bid of $64,637. Dew-El Corp., based in Holland, MI, submitted a bid of $73,214.

At the time of bid approval, plans were announced for table installation to start and finish during the spring break (April 7-11).

But installation did not begin until late Thursday because of a delivery delay.

The new tables are the same as the ones they are replacing, according to C-A assistant superintendent Russ Parks.

The mobile folding tables are designed to store vertically in recessed wall niches. That allows floor space in the room to be used for other purposes.