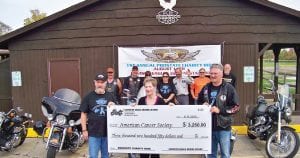 Danny Griggs, front left, and Guy Childers, both of the Davison Eagle Riders, present a check for $3,250 to Carol Boom of the American Cancer Society. In the background are other members of the club who helped raise the money.

DAVISON
— The Davison Eagle Riders presented a check to the American Cancer Society on Sept. 23 for $3,250 it raised during its Prostate Cancer Charity Ride last month.

The money raised will stay in Genesee County and will go toward prostate cancer screenings and other services to cancer patients.

Organizer Danny “Gripper” Griggs said the first ever prostate cancer charity event was a success and it’s something the Eagle Riders Club wants to expand upon in coming years.

“This is a very preventable form of cancer with proper checkups,” said Griggs. “people don’t have to die, it’s very treatable. “

Still, prostate cancer is the Number Two killer of men behind lung cancer, said Griggs. As much as the ride and benefit concert that followed was meant to raise money for the cause, it was also there to raise awareness and get men to have regular prostate cancer screenings.

Carol Boom, community representative for the East Michigan office of the American Cancer Society, said the funds raised by the Davison Eagle Riders will go toward screenings and a program called Road to Recovery which offers free Photo by Gary Gould rides to cancer patients so they can get to treatment without driving themselves or having family or friends take them.

“Families are still working while cancer patients are undergoing treatment,” she said. “Sometimes family members have to take time off work to take loved ones for treatment. Cancer patients sometimes feel they don’t want to be a bother. This helps them get to treatment on their own.”

Boom commended the Eagle Riders for taking on the prostate cancer cause because not many have in the past. Most fundraisers are aimed at breast cancer and other more publicized forms of the disease.

“It was an original idea,” she said.

The Eagle Riders have raised money in the past for breast cancer, but felt this year they would take on a cause for men. Griggs said the club plans to continue its efforts next year.

Guy Childers, president of the Davison Eagle Riders, said 57 riders took part in the ride, which covered more than 100 miles, on Aug. 19.