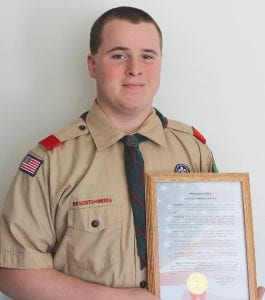 Tyler Duso holds his proclamation from Mayor David Krueger. He received the proclamation upon earning his Eagle Scout rank.

SWARTZ CREEK — On March 25, at the Swartz Creek City Commission meeting, 18-year old Tyler Duso received a proclamation from Mayor David Krueger for his attaining the rank of Eagle Scout.

Duso got his rank upon completion of one of the latest community projects he was involved in.

“I feel really great. Things kind of just worked out the way they were supposed to, and it feels really good to be able to see that I’m an Eagle Scout,” said Duso.

Duso, with the help of his troop, built a 32-foot long footbridge for Laingsburg elementary school’s nature trail. The bridge was constructed to provide safe passage over a drainage ditch.

Duso, along with his troop, has participated in several such community projects.

“We’ve walked around and did stuff for the Food Bank of Eastern Michigan, we’ve cleaned up the Veteran’s Memorial, we’ve polished that and cleaned up around there,” said Duso about a few of the things he’s done with the troop. “We’re always involved in stuff with the community.”

For his accomplishment, Duso was presented the proclamation at meeting by Krueger, and received a framed letter.

Duso’s been a scout for his whole life, a record he said he hopes to keep intact, even now. His mother and father both take pride in their son’s accomplishments, and continue to support his efforts.

“It was a long journey, hard work and we’re just really, really proud of him,” said Alicia Duso, Tyler’s mother.