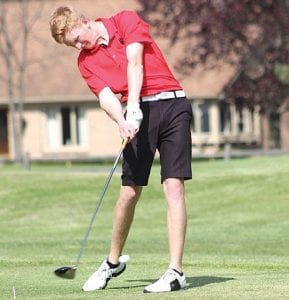 Grand Blanc’s Connor Carey was medalist with a 2- under-par 70.

Connor Carey eagled the 320-yard third hole and shot 2-under-par 70 to earn medalist honors in the Jack Nicklaus Group at Flint Golf Club. The Grand Blanc graduate posted the low-gross score in the championship flight by one stroke over Davison’s Gabe Schiller, who also scored an eagle, on the 302-yard 16th hole. Schiller tied Swartz Creek’s Ben Zyber for low-net honors with 69.

Anna-Marie Gainey of Grand Blanc and Andrea Richards of Davison tied for low-net honors in the girls’ championship flight with 75. Swartz Creek’s Kristen Loiselle had the low score in the first flight with a 94.

The FJGA will conclude its 74th season with a tournament next Monday-Wednesday at Swartz Creek Golf Course.