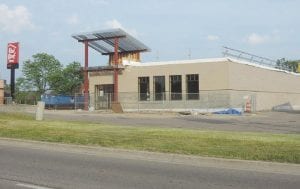 An I-hop restaurant, nearing completion on Miller Road, is among 52 new businesses that moved into the township, remodeled or expanded during the past year.

FLINT TWP. — The long-stalled Bay Mills casino was among topics for review during the annual meeting of the township’s Economic Development Corporation (EDC)

The group typically meets annually to secure its fiduciary status as an entity that encourages industrial and commercial development through its ability to purchase, construct, improve and maintain commercial and industrial projects and to borrow money, through tax-free revenue bonds. Due to lack of requests for its services board rarely meets during the course of the year.

Its first order of business was to re-elect current officers.

Courts, who is the township clerk, noted that she will be leaving office at the end of the year but agreed to serve until that time.

Tracey Tucker, township economic enhancement director, also was absent from the meeting but provided a list of developments during the past year.

Miller and Courts answered questions from the board, when possible.

She reported that she spoke with Bay Miller officials once this year and once at the end of last year. After the Supreme Court ruling mainly in their favor, the group is trying to work outside the courts for a solution to where state officials will allow them to operate. They are hoping to work out some sort of agreement with Gov. Rick Snyder before his terms expires. If not, they will have to start the process all over which could take another eight years, Miller said.

The lawsuit that had held up plans for more than four years was filed by state attorney general Bill Schuette.

EDC members also asked for a progress report on the I Hop restaurant under construction on Miller Road. Courts and Miller said project completion was pushed back due to structural problems with the old building that formerly housed Salvatore Scallopini. The restaurant has nearly been totally rebuilt and expected to open sometime this year.

Township planners still are waiting for drawings for the proposed redevelopment of Pirate’s Park expected to get underway this year, Tucker’s report said.

Tucker added that Flint Township has received a lot of attention for the I-69 Trade Corridor advertising and incentives.

Talecris Plasma is a new build in progress on Van Slyke Road north of Bristol and CSL Plasma is moving into a renovated space next door to Gander Mountain on Linden Road. Tucker said she has talked with people regarding the old K-mart property but has no firm leads yet. She is working with a food company interested in a new facility. There is a purchase agreement in place. She also is working with Genesee Valley mall officials on new properties in the Outdoor Village area. A Tier 2 supplier for General Motors is interested in moving to the Bristol/Van Slyke corridor.