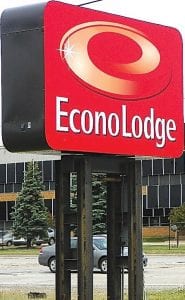 FLINT TWP. — A small hotel at 2215 West Bristol has new owners and a hopeful new beginning as a part of the EconoLodge franchise.

Formerly a Rodeway Inn, the 40-room hotel just east of I-75, has undergone substantial renovation including a new breakfast area, two handicapped compliant rooms, news beds and linens in every room, bathroom tile replacement in most rooms, new heating and cooling units in each room,an updated alarm and control panel system and exterior improvements.

Pam Cohen, manager. Other amenities include a free continental breakfast with stay, a microwawe and mini refrigerator in some rooms and an interior corridor with surveillance at the entrances.

The hotel and a now-closed facility next door, formerly a Days Inn, are both now owned by PSR Properties, based in Sterling Heights.

PSR plans to raze the hotel portion of the Day’s Inn some time this summer but keep the restaurant portion at the front of the building and offer it for sale. It includes a full kitchen and dining room. 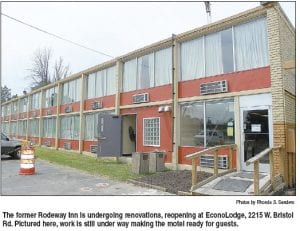 EconoLodge signage has been installed on the hotel and reservations are being accepted through the corporate system.

The housekeeping staff has been hired but management still is accepting applications for a front desk clerk. Cohen, who was hired in May, said more staff will be hired as business picks up.

Owners are hoping to attract business from nearby Bishop Airport, a GM plant across the street and from truckers. Cohen said that a parking lot for semis is being added to the rear of the property which will be expanded after the Day’s Inn is razed.

“We’ve put a lot of work in here,” Cohen said of the sprucing up costs and efforts. “Everyday it seems we’re coming up with new ideas,” she said.

Construction of a canopy with a circular drive approach at the front of the building started in mid-June, aimed at improving curb appeal. When completed, it will shelter patrons entering the hotel during bad weather. The front door will be relocated from the east side of the building to the north side beneath the canopy. Cohen said landscaping will be added when the canopy is completed.