Efforts during past year hampered by COVID-19 pandemic 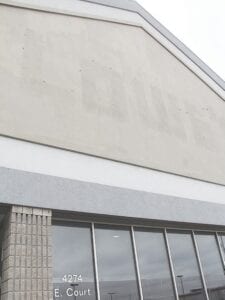 The former Lowe’s Home Improvement, 4274 E. Court St., is just one of many vacant retail stores in the Burton area. The Burton City Council is hoping Retail Coach can help it find new tenants for this and other vacant commercial buildings in the city. Photo by Gary Gould

BURTON — An economic development consulting company who has a $43,000 contract with the city, says it will need more time to complete its analysis of the city’s retail climate due to hinderances caused by the pandemic.

The Retail Coach, a Tupelo, Mississippi-based company, gave a report to the city council, Jan. 21, which indicated it has 60 retail companies interested in looking at Burton, but it asked for more time – at no additional cost – to complete its efforts to offer the council a retail market analysis.

The company was granted a one-year contract by the council in October 2019. According to Austin Farmer, project director for the Retail Coach, the company started working the first 90-120 days on a retail market analysis to better understand where people were coming from and where they were going to shop and dine in Burton.

Caroline Harrelson, retail recruitment specialist with Retail Coach, said starting in March they were hearing from retailers that they were on travel holds nationwide due to the COVID-19 pandemic, which prevented them from traveling to Burton to physically see the community, population numbers and day time numbers.

“This shut down making decisions,” she said. “The last six weeks or so retailers have been opening back up and travelling again. Just starting to see that movement again.”

Farmer said during the past year Retail Coach has talked to different retailers, represented city at retail events, has done on the ground recruitment and is looking at 60 prospects.

When Councilman Dennis O’Keefe pressed for details on the 60 prospects, Farmer said he is protective over the list because it could put potential retailers interested in coming to Burton at a “competitive disadvantage.”

He offered to make some of their information available to the council, but not publicly. Farmer said Retail Coach also has a real-time online dashboard where the city can track all conversations between the company and corporate retailers.

O’Keefe said he was “quite surprised” the council was not given the confidential list of the 60 prospects so they could see some progress.

Councilman Tom Martinbianco said he concurred with O’Keefe, advocating for more information sharing between the administration, who receives regular reports from Retail Coach, and the city council.

“(Harrelson) meets or talks with them monthly, why aren’t see getting an update?” said Martinbianco. “We need to evaluate if our association with (Retail Coach) is a benefit to the city.”

If a retailer is not interested, Retail Coach gathers feedback about why they don’t want to come to the community.

“We’re getting a lot of good feedback and there are a lot or retailers making site visits to the community,” said Farmer. “We’re pretty optimistic about the potential.”

“Things get out, it squashes the deal,” said Haskins. “I hope you (the council) don’t think this administration is trying to keep things confidential. It’s only until we get more things confirmed that’s when things can start coming the light a little bit more.”

Councilman Danny Wells said he’s watched some of the businesses go out in Burton, adding under the current pandemic only the strong are surviving. He said having a service like Retail Coach coming to the city is something that might help bring in more retailers, instead of simply hoping something will come here.

Harrelson said everything looked good before the pandemic hit and she said Retail Coach thinks extending the contract until the end of the first quarter this year, at no additional cost to the city, will allow the company to show more progress.

Haskins said he agreed, adding before the pandemic hit Retail Coach was actively working and then everything stalled.

“They’re not asking for a contract renewal or anything,” said Haskins. “It’s the waiting game…it doesn’t help this situation and hopefully things will start opening up again. Everything back in February looked real promising.”

Council President Steve Heffner said he agreed with Haskins, noting they were seeing positive results before the pandemic. He said because of COVID-19, as many as 30 percent of businesses nationwide are going to go away.

“Retail Coach will position us to make a comeback after this pandemic is put to rest,” said Heffner. “I think we should extend the contract a couple months at no cost and hopefully pandemic will be behind us.”

Farmer said he’s not comfortable using COVID as an excuse as to why they don’t have a retailer signed yet. He said Retail Coach values its relationship with the city and wants to help Burton identify what the community need with detailed analysis.

“What can it support? Where is the retail leakage? What are people buying, what are they not buying?” said Farmer. “We’ve made a lot of positive ground, there have been some COVID difficulties, but we never stopped. We’ve gotten Burton on the map with a lot of retailers who would not have considered Burton – I put a lot of value in that.”

The council took no action at the meeting.