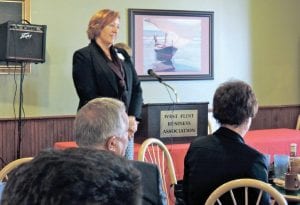 FLINT TWP. — Who wants to do business in Genesee County?

A variety of current and new companies, that’s who, according to Janice Karcher, vice president – economic development, Flint & Genesee Chamber of Commerce and head of a team whose duties include attracting investors, identifying site availability, trend forecasting, and talent and job creation.

Karcher spoke to the West Flint Business Association last week about potential growth in Flint Township, Genesee County and across the region.

One trend her team is seeing is booming growth in mid-sized business including manufacturers, software companies, and professional firms such as engineering and consultants.

“Those companies are bursting at the seams in many cases,” ( Karcher said. “They are outgrowing their spaces. They are hiring on a regular basis and quite often finding challenges in identifying people that are qualified to fill the positions they are creating.”

Karcher’s team works with companies already based here that are looking for larger facilities and also for companies interested in moving here from outside the area.

Genesee County has an advantage over neighboring counties in that it has still has a good supply of 40,000-50,0000- square-foot buildings that are most in demand. Shiawassee County has been out of that size facility for two or three years and so have Lapeer and St. Clair counties, Karcher said, adding that southern Genesee County also is down to less than ten remaining industrially zoned sites in the size that most companies are looking for.

Due to reduced market values, it currently costs more to build a new facility than to locate in one already built, she said.

Municipal partners county-wide are being encouraged to review their Master Plan to identify potential areas that can accommodate the next round of economic growth.

Karcher said her team also is working with its education partners to look at current job openings, forecast future employment opportunities and prepare a workforce to meet the demands.

There are many careers and good paying jobs that don’t necessarily require a four-year degree that people don’t know about, she said.

Karcher’s team is working with manufacturers to define those job opportunities and publicize them.

A Manufacturers’ Coalition formed earlier this year has a mission to analyze current workforce needs and plan for the future. Members include Crannie Signs and Koegel Meats in Flint Township, TMI Climate Solutions in Holly, the Coffee Beanery in Flushing and other lesser-known companies.