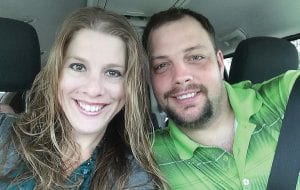 Entrepreneurs Dan and Stacy Pillera of Olympus Fare. Frequent demonstrations of the product have proved a big hit throughout the county and beyond.

Having worked in the food service industry all his life, Dan turned to entrepreneurship after job layoffs in 2008 and again in January of this year. After working for three different companies at five locations in four years, he sat down at his computer, “devastated and extremely frustrated” to look for another job, he said on the company’s web site.

It was Stacy’s idea to start marketing the salsa that they had been giving away to friends and family for years.

Dan started making salsa after looking for ways to use tomatoes provided by a generous neighbor with a bumper garden crop. He found an old recipe, tweaked it for health and flavor and most importantly made a big change in the crafting process. They made more salsa than they could eat and began giving it away. 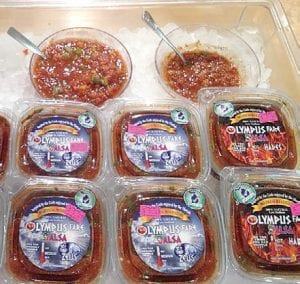 Initially, Dan didn’t take too seriously requests for more pouring in from everyone who tried it.

“Just one taste and people started suggesting that I sell it on the market,’ Dan said.

The Pilleras decision to start their salsa business came at a time when Stacy, a sales and marketing executive in Troy, had tired of the daily freeway commute.

They started with a shared-use commercial kitchen in Holt but are currently negotiating a contract for their own production kitchen in Holly, closer to their Grand Blanc roots. Their product and packing is of the highest nutrition and “green” standards and Michigan-made as much as possible.

They’ve had phenomenal success since launching the business in late February. Colony Market in Grand Blanc was one of their first selling locations and they expanded to 16 locations including Swartz Creek, Burton, Flint, Linden, Flushing and Fenton.

The Pillera are in negotiations with several larger grocery chains to sell the salsa and also planning to hire staff soon for the Holly kitchen.

The company’s name was inspired by movies the couple watched based on Greek mythology, Dan said. Flavors are Aphrodite (mild), Zeus (medium) and Hades (hot). They offer frequent product sampling across the area for those who want to taste before buying.