Economy is better than you think 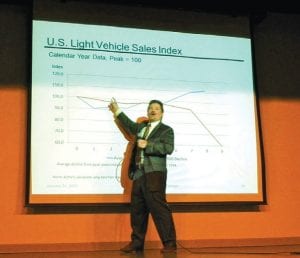 FLINT TWP. — Consumer confidence is lagging behind actual economic recovery, according to Paul Traub, business economist for the Federal Reserve Bank of Chicago, Detroit Branch, who gave a presentation at Baker College Monday night about the improving economy in Michigan and the United States.

Stressing that his opinions were not necessarily those of the Federal Reserve, Traub guided the audience through a 70-slide Powerpoint of graphs, charts, historical comparisons and economic forecasts for Michigan, the United States and global developments.

Key economic indicators of growth in the Michigan economy are showing up in manufacturing, construction, employment and of course the auto industry, he said.

The consumer savings rate is up but spending is down contributing to a slower recovery from the 2009- 09 recession than previous ones. That differs from the recession circa 2001 when consumers weren’t saving at all but instead drawing on the high equity in their home values to keep spending, Traub said.

Consumers are holding onto their cash because of uncertainty over economy issues such the recent “fiscal cliff” battle in Washington at the end of 2012, rising health care costs and fluctuating financial markets.

“People don’t like uncertainty,” Traub said. “What happens is they start to get upset and it shows up in their consumer confidence.’’

He speculated that as consumers regain that confidence, pent-up demand will bring a boost to Michigan’s economic growth.

One of the big game changers will be homeowner’s equity rates which are starting to percolate, he said.

Homeownership rates are trending up as costs to rent have begun to exceed the cost of owning, he said. That’s a turning point.

The unemployment also rate is coming down slowly and forecast to return to full employment by 2015. The Federal Open Market Committee (FOMC), which oversees the nation’s monetary policies, has voted not to rate interest rates until then unless unemployment drops below 6 1/2 percent.

“If you are a business man and you are worried about us raising the rates, unless you see unemployment rates fall below 6.5 percent, rates will stay where they are,’’ Traub said. “We are going to try to keep stimulating the economy.”

As the economy improves and jobs are restored, there’s a tendency to become content.

“You can’t take your eye off the fact that we need to diversify our economy,” he said. “We can’t just keep putting all our eggs in one basket.’”

Diversifying the Michigan economy is one of the most important things to be done moving forward, he said, adding that he is excited to see developments such as bridge building and the burgeoning environmental “green” industry.

A complete text of Traub’s comments can be read online on his blog about the Michigan economy. Go to michiganeconomy.chicagofedblogs.org/ and click on recent presentations.