Ed Ronders passes away at 74 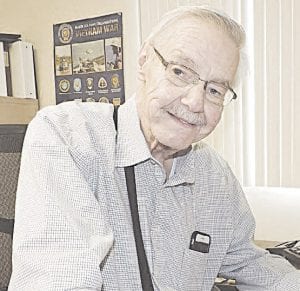 LAPEER — Lapeer County veterans — and others — lost a good friend May 3 as Ed Ronders passed away at the age of 74.

Ronders stepped down last year as director of Lapeer County’s Dept. of Veterans Affairs, a position he’d held since 2015, and called the most rewarding of all the careers he’d had.

He was also the editor of the Davison Index in the 1980s.

Ronders served in the U.S. Navy and got his degree in journalism after earning a William Randolph Hearst Scholarship. He served a three-year tour of duty as a Navy journalist and then enjoyed a long career in the writing field. One particularly entertaining piece of his history comes from his time as sports editor at the State News at Michigan State University, where he wrote extensively about recruiting violations in MSU’s football program.

In 1976, Ohio State’s football coach Woody Hayes admitted he had been the whistleblower regarding MSU’s violations, for which the Spartans were heavily penalized by the NCAA. At a press conference, Ronders told Hayes he was planning to publish stories about some violations he had dug up about Ohio State, and all hell broke loose.

“Woody Hayes went nuts,” said James Smith, who later worked with Ronders at the Flint Journal. “He was going to strangle him if he caught him. Ed became quite a legend after that.”

According to Sports Illustrated archives, “Hayes exploded and chased Ronders across the room. Ronders, faster in the sprint, eluded him.” After that, Hayes apparently smacked Bob Page of WJR in the forehead, and the reporters decided to stop poking the bear.

Smith said that’s when he first heard of Ronders, and it wasn’t until 1989 that the two met, when Smith went to the Flint Journal, where Ronders was a writer for the short-lived Lapeer Bureau of the newspaper.

“We just became fast friends,” said Smith, adding that the two had the MSU connection and were both Navy veterans.

They remained friends for the rest of Ronders’s life.

“He was just a kind-hearted man who did a hard-hitting job, and he was perfect at it,” said Smith. “He knew how to ask a hard question in a way that put people at ease.”

Despite retiring from journalism in 2004, Ronders never lost his inner reporter. At times he would pen columns for The County Press with news for veterans, and even just a couple weeks ago as he was in the hospital, he was contacting the media offering to give an inside scoop about what was happening on the front lines in the COVID-19 pandemic, based on what he was hearing and seeing within the hospital walls.

After he left journalism, Ronders turned his focus to the veterans and founded VetBizCentral Inc., a nonprofit focusing on assisting veteran entrepreneurs. In 2015, Smith said someone reached out to see if he would be interested in becoming the director of Veterans Affairs for Lapeer County. Instead, he referred Ronders for the job.

“Ed just fit that role perfectly. He loved people and he had a heart for veterans that people in Lapeer County got to see,” said Smith. “I think I can speak for most veterans in the county — he bent over backwards to get whatever he could to make their lives better. The veterans really lost a good friend.”

He was thinking about retirement when he became ill last summer, and took it as a sign that he needed to slow down and enjoy the time he had left at home in Fenton with the love of his life, his wife Janet.

“Sometimes you have what you really need right in front of you,” he said at the time, as only a man content with his life can say. “I’ve had the opportunity to help veterans and in actually helping them, I’ve seen people’s lives change. That’s a good feeling. I’m selfish that way. I’ve had three different careers in my life, and this is by far the most rewarding job I’ve had. It is.”

As the end neared, Smith said, Ronders was reassuring to his wife and closest friends that he considered his to be a life well lived.

“He was at peace, calm and knew the end was coming. He shared with her how happy he was with his life,” said Smith. “He was a wonderful, wonderful man.”