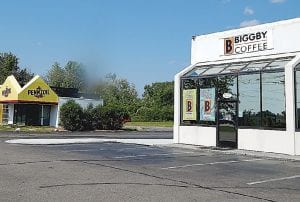 Biggby Coffee and Mike’s Complete Auto Repair and Sales are two of about 67 businesses setting up shop in Flint Township in the past year.

FLINT TWP. — A proposed Renaissance Zone near Bishop International Airport and potential tenants for the old Best Buy and Border’s Books stores on Miller Road are among the economic development projects happening in the township in the past year, said Tracey Tucker, economic enhancement director, in an update presented last week at the annual meeting of the Economic Development Corporation.

The EDC meets annually, or as needed, and was set up to encourage industrial and commercial development through its ability to purchase, construct, improve and maintain commercial and industrial projects and to borrow money.

Since it has not been done before, the MEDC is taking its time with granting approval.

“MEDC wants to get it right the first time, to set a precedent for others as to what a renaissance zone can be,” Tucker said.

The proposed renaissance zone designation in Flint Township includes about 63 acres of land near Bishop Airport. It is one of six sites in Genesee County submitted by the I-69 Trade Corridor NMDC which is a four-county economic development partnership formed last year to attract businesses and jobs.

When the renaissance zone gets MEDC approval, the I-69 NMDC will spearhead marketing efforts to attract new businesses to the township, she said.

Another big development is Senderra RX, a pharmaceutical company that recently opened a call center on Bristol Road with the promise of bringing in about 170 new jobs.

Another call center with potential to bring up to 400 jobs is being considered for the old Great Lakes Power Sports/Best Buy store on Miller Road, she said. That’s a joint project in cooperation with the Flint & Genesee Chamber of Commerce, she said.

Also the company that bought and is redeveloping the former Circuit City store also has purchased the former Border’s bookstore on Miller Road and is looking at redevelopment ideas.

There’s been no update on tentative plans to open an Indian-owned casino at Dutcher and Lennon roads. Legal challenges to the plan have not been resolved.

Tucker also mentioned that a Biggby Coffee franchise is moving into the Medawar Plaza on Miller Road and Mike’s Auto Repair is taking over the former Pennzoil oil change building next door.

McLaren’s Hospitality House is getting ready to open on Beecher Road.

New businesses include several tenants at Genesee Valley Center shopping mall and A+ Mini Storage at Fenton and Maple.

Eli Damouni, an EDC board member, said he would like to see greater efforts made to announce and promote new businesses in the township.