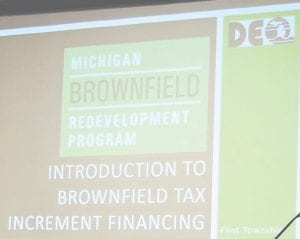 FLINT TWP. — The township Economic Development Corp. (EDC) is up and running with several irons in the fire. The EDC is again actively pursuing economic development projects after many years of being an inactive body that met once a year in May to fulfill legal obligations.

Administrative duties are handled by Tracey Tucker, township deputy clerk, building director and economic enhancement director. Last week, the board reviewed and recommended a Resolution of Intent to form a Brownfield Redevelopment Authority, after hearing a presentation from the Department of Environmental Quality. It also approved an updated 10-year Michigan Economic Development Interlocal Amendment, extending a previous agreement that expires April 4, 2019.

Tucker updated the board on her recent activities including work on the five-year update of the township’s Master Plan, and completion of her state-required Redevelopment Readiness Certification. For more information about the latter, see www.michiganbusiness.org/cm/files/factsheets/redevelopmentreadycommunitiesprogram.pdf

Tucker also said she is seeking to create partnerships for various development projects. For one, she is meeting with Paula Zelenko, Mayor of Burton, to possibly create an Intergovernmental Agreement for Fenton Road Corridor development. Flint Township shares part of its eastern border with Burton.

Another potential partnership is being sought with McLaren Hospital for beautification efforts along the Beecher Road Corridor between Calkins Road and Ballenger Highway. Progress also is being made on the I-69 trade corridor to attract new developers. Tucker plans to travel to Washington D.C. next month with a Genesee County contingent to meet with representatives of the I-69 Congressional Caucus, advocating development of an I-69 trade corridor stretching from Michigan to Texas.

Tucker said she also will be arranging for economic development officials to come and address the EDC. EDC board meetings are public. The group meets on the second Wednesday of each month at 4:30 p.m. Its next meeting is May 10.