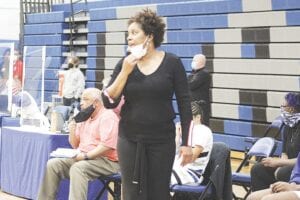 Edwards, who coached her first season at Carman- Ainsworth this year, accepted an assistant coaching position with the Chicago Sky of the Women’s National Basketball Association (WNBA) in March. She is one of three assistants with the Chicago Sky, which will be starting its regular season on May 15.

Prior to coaching at Carman-Ainsworth, Edwards served as an assistant coach in the WNBA with the Los Angeles Sparks and was on the staff for the Sparks’ 2016 WNBA Championship.

Carman-Ainsworth Athletic Director Mary Haslinger said that the district is 100 percent behind Edwards and her decision to coach both at the pro level and at Carman-Ainsworth High School.

“Tonya’s coaching at Carman won’t impact the Chicago Sky, as their season goes from April through October and we run from November through March,” Haslinger said. “It’s the perfect fit scheduling-wise.”

“Tonya believes in the power of the student athlete and developing them to their greatest potential,” Haslinger said. “Even with her new pro position, she wants to continue giving back to our program and the Flint area. We’re really lucky to have her here.”

Edwards, a former Flint Northwestern star, guided her team to consecutive Class A state championships in 1983 and 1984. She then returned to her alma mater in 1990 as head coach and led the Wildcats to the 1993 Class A State Championship with a 28-0 record. She was also the head coach of the Alcorn State University women’s basketball program from 2008 to 2015.

Edwards played her college ball at the University of Tennessee and won two national titles in 1987 and 1989. She played professionally in Spain and the American Basketball League (ABL) before being drafted by the Minnesota Lynx in 1999 and spending three seasons in the WNBA.

In her first season at Carman- Ainsworth, Edwards led the Lady Cavaliers to a 6-7 record and a berth in the Division 1 District Final.