Efforts made to clarify who outside Flint uses city water 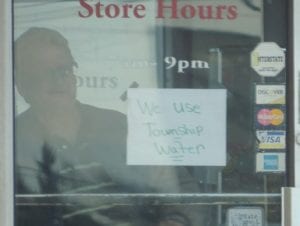 Instead of the daily special, the Westside Diner on South Ballenger Hwy. at the Flint border, has posted signs to reassure customers that its water is supplied by Flint Township, not Flint.

FLINT TWP. — Sunridge Apartments on Flushing Road, Bishop International Airport on Bristol Road, the McLaren Hospitality House on Beecher Road and a couple of restaurants on Ballenger Highway were included on a list of water customers outside of the City of Flint that were publicly posted on the city’s website on Friday January 29.

Turns out that most of those businesses were incorrectly listed, requiring that steps be taken to remove them from the posting, to avoid public confusion.

A manager at the Westside Diner, 2336 S Ballenger Hwy. said he personally visited Flint City Hall first thing Monday morning to remove his address from the list. City Hall was closed over the weekend or he would have done it sooner.

To ensure that his customers are not misled, he has posted signs on the marquee outside and on the door to let them know that the popular classic 1950s diner only uses water supplied by Flint Township, which come from Detroit via the county water supply. 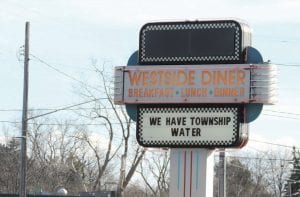 “No buildings for which we are in control on the airport campus are supplied with water from the City of Flint,” he said.

However the mistake might be due to a billing change. Williams, who took the helm at Bishop in 2014, said that staff informed him that the airport has used Flint Township water since circa 1988. But for some reason billing for some airport buildings was done through the City of Flint until spring 2014. That coincides with the time that Flint switched from Detroit water to Flint River water, which led to the current crisis with lead contamination. Williams said that at that time, the airport’s billing was switched completely over to Flint Township.

He also said he would be working to “close that loop” of the airport’s address being mistakenly included on the list of Flint water customers.

Laurie Prochazka, McLaren’s corporate director of marketing, also confirmed that the Hospitality House, 3170 Beecher Road, does not use Flint water.

The $8 million, 32-room facility, opened in mid-2013 to provide cancer patients and their families a comfortable place to stay while undergoing treatment next door at McLaren’s Proton Therapy Center.

“The Hospitality Houses is on the Flint Township water system which has never changed from the Lake Huron source,’’ she said.

Kristin Moore, City of Flint public information officer, who posted the list of “Non-City of Flint Residents Who Receive Flint Water,” did not respond to a call requesting clarification.

Her posting last Friday said “this is not a new list. The information has been provided previously and officials of the affected municipalities have been notified. However, due to the ongoing water situation we felt it important to issue a reminder. We want to remind these residents to have their water tested with the free home testing kits being provided at water resource sites around the City. They may have also been affected by the water disaster in Flint and should be using the filters and bottled water being provided free of charge.”

The city’s list includes addresses in Burton, Mt. Morris Township and other municipalities that share a border with the city of Flint. Confirmation should be sought with the appropriate municipality but the full list of addresses posted by the city can be viewed online at www.cityofflint.com/2016/01/29/non-city-of-flint-residents-who-receive-flint-water/ Flint Township Treasurer Marsha Binelli confirmed on Monday that Bishop Airport and McLaren Hospitality House are township water customers.

Flint Township Supervisor Karyn Miller supplied a list of what “franchise” customers who live on the borders of the township and use Flint water. There are about 53 addresses on the list she obtained from the Genesee County Drain Commission Water and Waste Division. The list includes businesses and residences. All of them were notified months ago and their franchise status is indicated by the letters FWC on their water bills, Miller said. Anyone with questions, can contact Binelli or Miller at the Flint Township administration building.

Sunridge Apartment, 3348 Flushing Rd, as indicated on the City of Flint customer list, is supplied by Flint water, which included the transition to Flint River water in the spring of 2014. Flint switched back to the Detroit in October 2015 after it was found that the treated river water lead levels were too high and posed a health threat.

Sunridge’s property manager said they have worked with the Red Cross to provide bottled water and new filters to all tenants.

Township Supervisor Miller added that the township water line is available at Sunridge but requires tap-in fees. She said she is working with Sunridge management and the county drain commission to try to work out an arrangement to hook the apartment complex to township water.

Miller also said that some confusion about the township’s water source was created by a postcard mistakenly mailed by state officials to Flint Township residents who are not Flint water customers.