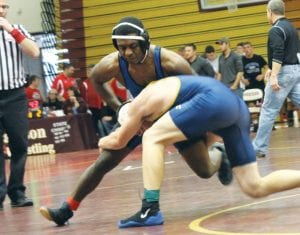 DAVISON — Eight wrestlers placed among the top six, and Carman-Ainsworth finished seventh as a team with 73 points in the Saginaw Valley League tournament last Saturday at Davison High. Davison won the title with 253.5 points.

Herbie Keskes was third at 171. Taking fifth were Cameron Braun at 135 and Lorenzo Redmond at 160, and placing sixth were Damion Wilkes at 112 and D’Mario Blue at 152.

The Cavaliers opened postseason competition last night in a Div. 1 team district at Swartz Creek, along with Flushing and Grand Blanc. The winner advanced to next Wednesday’s regional at Davison against the Midland Dow district winner.

This Saturday, the Cavs will wrestle in the individual district at Alpena, where the top four placers in each weight class will move on to the regional Feb. 15 at Oxford.