Elected officials react to Snyder’s State of the State address 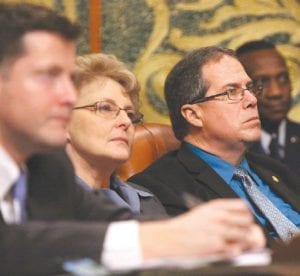 GENESEE COUNTY — Michigan Gov. Rick Snyder outlined a number of goals and plans for 2013 during his State of the State address, Jan. 16.

Snyder, a Republican, who is in his first term as governor, praised the fact that under his administration Michigan’s budget is balanced and strides have been made to restore Michigan jobs and industry.

State Sen. David Robertson (R-Grand Blanc Township), applauded the governor’s efforts and those of the legislature over the past two years.

“Gov. Snyder touched on a number of issues, but the overall tone of the speech was clear–progress has been made but there is much more work to be done,” said Robertson. “Just over two years ago, Gov. Snyder delivered his first State of the State address. In that speech, the governor charted a bold course to reinvent Michigan. That same message resonated again tonight.

“When the Senate took office in January of 2011, the state was facing a $1.5 billion budget deficit. Now, in January of 2013, the state budget is balanced and there is more than $500 million in the state’s rainy day fund. That’s a $2 billion turnaround in just under two years.”

State Rep. Woodrow Stanley (D-Flint) responded to the State of the State address with skepticism about appeals for bipartisanship and worry about policies that could hurt working families.

“After gutting the Earned Income Tax Credit, creating a pension tax and passing right-to-work, this partisan governor is asking for bipartisanship?” Stanley said. “It is as if Gov. Snyder wants to put lipstick on the pig. He and Speaker (Jase) Bolger’s agenda is as partisan as it gets.”

In his address, Stanley said, Snyder did not mention middle-class tax cuts, relief for seniors who now pay taxes on retirement income or restoring $2 billion in education funding.

He continued his support for the Education Achievement Authority, which paves the way for school vouchers and allows for-profit corporations to take over public schools, said Stanley.

Among his more ambitious plans, the governor called for higher gas taxes and vehicle registration fees to raise an extra $1.2 billion a year to fix roads and bridges, increasing to $1.5 billion by 2015.

But he did not say by how much gas taxes or vehicle registration fees should rise.

Snyder also called for changes to Michigan’s no-fault auto insurance system to limit the size of medical claims, which the governor said he thinks are too high.

“Gov. Snyder is not working for common ground or shared sacrifices if he is asking to raise driver registration fee that is nothing more than another Republican regressive tax,” Stanley said. “We need a sound plan, not something that continues to hurt the working class.”

State Rep. Joseph Graves (RArgentine Township) said after the address he thinks the governor highlighted the progress state Republicans have made streamlining and simplifying state government for Michigan’s hardworking taxpayers.

Graves said there is still work to do in returning Michigan to its full potential. He said the governor stressed some of these challenges in his speech and though there are no easy answers, Graves said he too is committed to finding long-term solutions for residents.

“Since taking office I have remained focused on creating a healthy economy, bringing jobs back to our state and working to increase public safety in our local communities,” said Graves. “These will remain my top priorities and I look forward to finding common sense solutions to make Michigan a great place to live and work for decades to come.”

“The governor painted a rosy picture of Michigan’s situation to hide the fact that his policies aren’t working,” Smiley said. “His massive corporate tax cut — paid for by raising taxes on the middle class and seniors — isn’t creating jobs, but we still have to foot the bill. It’s time for a new course of action.”

Smiley said Snyder did not mention middle-class tax cuts, relief for seniors who now pay taxes on retirement income or restoring $2 billion in education funding. He continued his support for the Education Achievement Authority, which paves the way for school vouchers and allows for-profit corporations to take over public schools. Michigan drivers would also pay more in annual car registration fees under Snyder’s infrastructure plan, and possible reform to Michigan’s No-Fault Insurance law could limit benefits for car accident victims.

“We can’t expect students to succeed when the Legislature diverts billions of dollars from education funding. Setting up our schools to fail — and punishing them with a corporate takeover when they do — is the wrong approach for Genesee County and for Michigan,” Smiley said. “Instead, we need to stop raiding the School Aid Fund and invest in our children’s future. That’s the true path to job growth, and one I fully support.”