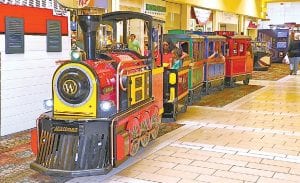 All aboard! Adi Twina, owner and operator of a new trackless train ride at Genesee Valley Center, ferries passengers on a ride throughout the mall.

FLINT TWP. — Many Genesee Valley shoppers have been pleasantly surprised to see a miniature passenger train rolling along the mall’s corridors.

The Mini Express battery-operated electric train has been providing rides throughout the mall since early February.

More than 4,000 people rode the trackless train during the first month of operation, said Adi Twina, operator of the new family-owned business.

“The train has been a welcome addition to the mall, receiving positive reviews from shoppers and merchants alike.,’’ said Kristen Cassabon, mall marketing manager.

It operates from a station (kiosk) in front of the JourneysKidz store in the Sears wing. Each ride costs $3 per person and last about 8 minutes. Routes vary depending on who is on board, Twina said.

Besides the battery-powered engine Twina occupies, the train has four cars that can seat up to 24 people.

“We have a line waiting,’’ Twina said of high interest in the train ride. Adults ride it too, he added, noting that many older people who walk in the morning at the mall have hopped a ride on the train.

The train is equipped for safe operation even in a crowded mall.

“There are sensors in the front of the train to protect (shoppers). If someone is in front of me and not paying attention, the train will stop,’’ Twina said.

The choo-choo blows smoke at Twina’s command and naturally has a whistle but operates quietly with no smell.

Unlike some amusement rides made of Fiberglass, the train’s four passenger cars are made of wood and contain no chemicals in the paint, Twina said.

Twina and his fiancee who are getting married next week had been operating a soft goods kiosk at Genesee Valley and at Fashion Square Mall in Saginaw when they decided they wanted to try something new.

Similar trackless trains are operating in malls across the country.

Twina learned about them from his best friend in Hawaii who operates one.

Twina said they ordered the train shortly after Christmas and had it up and running by February 1. The colorful, handmade train is custom-made and patterned after a 19th century train, Twina said.

The train operates during mall hours seven days a week. Twina recharges the train’s battery overnight, similar to an electric car, and the power lasts two days, he said.