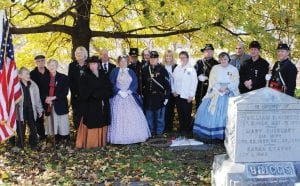 SWARTZ CREEK
— What started as an interest into an unmarked grave has turned into a historical passion for resident Len Thomas. Thomas and his wife, Sharon, who have been “chasing Civil War graves” for seven years, recently chased down “Elusive Lucy,” aka Lucy J. Blanchard, a Civil War nurse who died in Fenton.

Blanchard, who was from New York, died in April 1911 while living in Fenton. Her remains were returned to Syracuse for burial, but there was no headstone on her grave. As the years passed, Blanchard’s life story began to fade away until Thomas, a historian and Civil War researcher, discovered her at the state library.

“I found Lucy’s indigent record at the state library,” he said. “Thirteen years after her death, they (the Daughters of Union Veterans of the Civil War) named a chapter after her, but there was no diary, no letters, no scrapbook. What I’ve discovered I’ve picked up through genealogy and research on Civil War soldiers.” The chapter named for Blanchard was established in 1924 and named the Lucy J. Blanchard Tent #25 in Fenton. 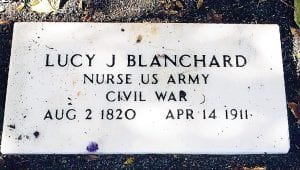 So who was Lucy Blanchard? She was born Aug. 2, 1820 in Cattaraugus County, New York, the daughter of John and Polly Holdridge. She came to central New York in the 1840s and in 1860, she was a teacher at the Onondaga Orphan Asylum. She married William H. Blanchard on May 11, 1862 and in 1863, she volunteered as a nurse under Dorothea Dix, who was Superintendent of Union Army Nurses at the outbreak of the Civil War. As a nurse, Blanchard was actively involved at the Battle of the Wilderness. Although she returned to civilian life in 1865, Blanchard did not receive a pension from the government for her service during the Civil War until 1890.

Still intrigued by the “Elusive Lucy,” Thomas went to visit her grave last summer in the Oakwood Cemetery in Syracuse. While at the cemetery, Thomas met Darothy DeAngelo and Sue Greenhagen, were are both members of the Daughters of Union Veterans (DUV) chapter in Syracuse. DeAngelo and Greenhagen took him to Section 5 where Blanchard was and upon searching the area, they determined that she was in an unmarked grave and the plan was made to give Blanchard proper recognition with a headstone.

“The government provides free headstones, and my wife and I provided the money to have it installed,” Thomas said. “After 99 years, she finally has a headstone.”

To mark the occasion, the DUV chapter in Syracuse held a gravesite dedication ceremony Nov. 13, 2010, coinciding with Veterans Day celebrations. The Thomases traveled from Swartz Creek for the ceremony, which featured Civil War reenactors who stood sentry at the grave, the firing of a volley and playing of taps. “We were honored to be there,” Thomas said of the ceremony, which drew approximately 30-40 attendees.

But the piecing of “Elusive Lucy’s” story has not stopped since. Thomas currently is writing a book about Blanchard, and hopes to have the book published sometime in 2011 to coincide with the Sesquicentennial of the beginning of the Civil War.