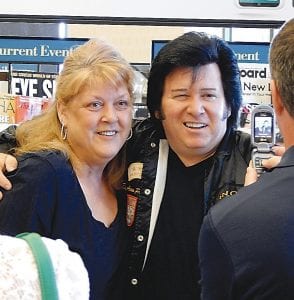 ELVIS FAN CLUB — Elvis Aaron Presley Jr., who says he is the son of the late singing legend of the same name, stopped by Barnes & Noble bookstore Monday to meet and greet fans. He signed copies of his CDs, posed for pictures and made small talk about his music with fans who came to see him. Several told him they were also planning to attend his schedule performance Tuesday night at the Clio Amphitheater.