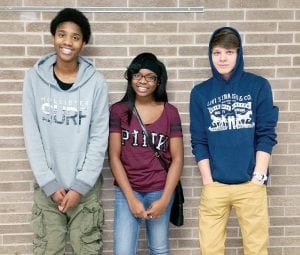 Donnell Spencer, Nandi Collins and Joshua Dubay, students at Carman- Ainsworth High School, are co-authors of a new book “Enable Us,’’ to be presented during a book signing and free educational workshop next month.

FLINT TWP. — Since stepping down from the Carman- Ainsworth school board in 2013, Recco S. Richardson is keeping busy helping district students.

A state of Michigan licensed professional counselor, Richardson heads up the schoolbased Adolescents for Better Learning Endeavors (ABLE) program that provides resources, support, motivation and guidance to help students improve their academic and social life, emotional maturity and decision-making skills. Students identified as “at-risk’ are selected to participate in the program by a building principle.

Richardson met Joshua Dubay in August 2014 when the young man was referred to the ABLE program.

“He made it clear that he wanted no parts of the program, had no intentions of meeting with me again and quickly convinced himself that he did not want to be around other students” Richardson recalled.

Now Richardson describes Joshua as a ‘very focused and motivated person with a life plan. … He is one of the most active and dedicated participants in our program.”

Joshua also is one of three CAHS students who have collaborated with Richardson to write a book. Book co-authors Nandi Collins and Donnell Spencer also are ABLE participants.

Their book, “Enable Us: Urban Students Reflect on Education,’’ will be featured during a free community workshop and book signing event on April 6 and 7 at the Uniquely Created Children’s Center, located in the former Powers Catholic High School building, at G-2040 W. Carpenter Road.

All profits from the sale of the 57-page soft cover book ($11.99) will go to the students, Richardson said.

Written in first person, “Enable Us’” explores the thoughts and feelings of each teen on selected subjects and provides insight into the needs of urban K-12 learners.

“This book was born in November 2014 during a casual conversation that I had with one of the teen authors of this book,” Richardson said. “He was processing his feelings and describing his daily experiences at school and home. He was not frustrated. He was simply taking an honest assessment of his education and life thus far.”

They agreed that his insights should be committed to some sort of position paper and that a good time to do that would be during the program’s educational/ cultural field trip to Toronto, Ontario in December.

The idea was shared with other program participants during a weekly after school intervention group a few days later. All 14 participants embraced the idea but ultimately Joshua, Nandi and Donnell were the only three to complete their writings.

The book is dedicated to every American teen enrolled in school who has been marginalized, struggled to get along with their teachers and parents, questioned the importance of attending school regularly or had concerns about their education and … having to deal with obvious and subtle changes in their education, Richardson said.

It also is dedicated to “hard working, urban classroom teachers” who persist through challenges because they believe they re making a difference, he said.

The teen authors will be featured in a special panel discussion at the aforementioned ““Enabling Students To Learn & Emote” workshops, offered from 9-11 a.m. on Monday April 6 and 6-8 p.m. on Tuesday April 8.